Quartararo, Augusto Fernandez and McPhee command the frees at Silverstone 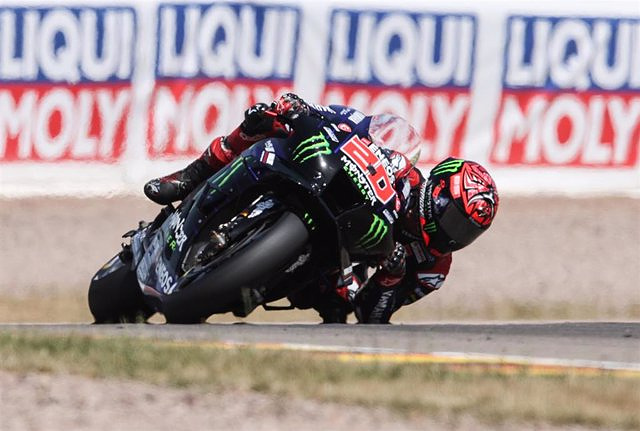 Frenchman Fabio Quartararo (Yamaha), in MotoGP; the Spanish Augusto Fernández (Kalex), in Moto2; and Briton John McPhee (Husqvarna), in Moto3, dominated the first day of free practice for the British Grand Prix this Friday, the twelfth round of the Motorcycle World Championship and the first after the summer break.

Returning to action after more than a month of vacation, 'El Diablo' once again showed that he is still in top form and willing to increase his income at the head of the general classification of the queen category. After being fourth in the morning, in the afternoon he set a time of 1:58.946 that allowed him to lead the combined times and be the only driver to go below 1:59.

After the one in Nice, who will have to serve a 'long lap penalty' in the race for an action on Aleix Espargaró (Aprilia) in Assen, the Spanish Joan Mir (Suzuki) was second, who repeated the position of the first practice session in Silverstone , and Maverick Viñales was the first Aprilia, third.

The second in the championship, 21 points behind the Frenchman, Aleix Espargaró (Aprilia), closed the 'Top 5' just behind the dominator of the morning, the Frenchman Johann Zarco (Ducati), while Alex Rins (Suzuki) was also between the top ten, seventh.

In the intermediate category, Moto2, Augusto Fernández (Kalex), who is tied for points in the lead with the Italian Celestino Vietti (Kalex), was proclaimed dominator on Friday after commanding FP2 and improving one position compared to the morning, where led by the British Jake Dixon (Kalex).

In the evening session, the Spaniard and the Dover rider exchanged positions and commanded a 'podium' that Alonso López (Boscoscuro) completed, all in a day marked by the 'unfit' of Murcian Pedro Acosta (Kalex), who has not received the approval of the doctors to race due to the fracture of the femur that already caused him to miss the Grand Prix of the Netherlands.

Albert Arenas (Kalex) improved in the second free practice to end the day fifth, while Arón Canet (Kalex), 30 points off the lead after not being able to race in the Netherlands due to a nosebleed, finished thirteenth.

In Moto3, the British John McPhee (Husqvarna) dominated the day after improving his time by almost two and a half seconds compared to the morning session, where he closed the 'Top 10'. The Scotsman, who took advantage of slipstreams, was the only one to drop below 2:11 this Friday, leading Spanish Izan Guevara (GasGas) by four tenths.

The rider from Palma, seventh in the morning, aims high at Silverstone by finishing second in the second session ahead of his compatriot Xavi Artigas (CFMoto). Meanwhile, his teammate on the Gaviota GasGas Aspar Team and leader of the World Championship -with a three-point lead over Guevara-, Sergio García Dols, significantly lowered his performance and after leading the first round finished eighteenth in the second.

David Muñoz (KTM), seventh, and Jaume Masià (KTM), ninth, also made it into the 'Top 10' on Friday, in which the Italian Dennis Foggia (Honda), current world runner-up and third overall, He was eighth in the combined times.