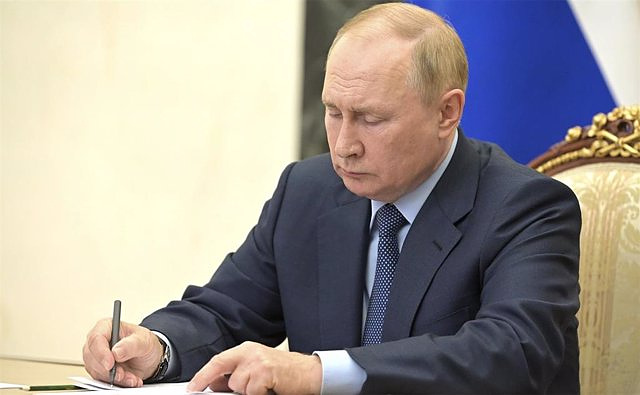 The president of Russia, Vladimir Putin, has suggested this Wednesday the possibility of limiting the export of grain from Ukraine to European countries and has announced that he will discuss this matter with his Turkish counterpart, Recep Tayyip Erdogan, who has mediated since the outbreak of war on February 24.

"Perhaps we should think about limiting the export of grain and other foods on this route (between Ukraine and Europe)," Putin defended. "I will consult with President Erdogan. After all, he was the one who worked for the Ukrainian grain export mechanism (after the reopening and reactivation of Ukrainian ports closed due to the Russian invasion)," he said.

Likewise, Putin has recognized that some sectors of the Russian economy are experiencing problems, although he has emphasized that "in general, the economic situation has stabilized". "We see problems in some industries and regions, in companies in the country, especially those that are linked to supplies to Europe or that received products from there," he explained.

The Russian president has also stated that inflation in Russia is falling and has underlined that he expects the figure to be around twelve percent by the end of the year, while criticizing the "short-term actions of the Western authorities", which he has accused of "causing global inflation that has already broken records in developed economies."

"At the end of July, inflation in the United States was 8.5 percent. Now we have it around fourteen percent and not much, but the trend, unlike in Western economies, is downward. increase, but in our case it will decrease," Putin stressed, as reported by the Russian news agency TASS.

Along these lines, he stressed that he expects inflation in Russia to be around four percent at the beginning of 2023. "According to many of our experts, in the first quarter or the second half of next year we will possibly be among the five and six percent, although some say that it will reach four percent. Let's see, in any case, positive trends," he said.

On the other hand, the Russian president has indicated that the niche of European companies impacted by the sanctions imposed on Moscow could be filled by US companies. "It would not be surprising if, as a result, the child of European companies in the continent and the global market is occupied by their American employers. In pursuing their interests they never limit themselves and do not hesitate to achieve their goal," he concluded.

‹ ›
Keywords:
RusiaVladimir PutinErdoganUcrania
Your comment has been forwarded to the administrator for approval.×
Warning! Will constitute a criminal offense, illegal, threatening, offensive, insulting and swearing, derogatory, defamatory, vulgar, pornographic, indecent, personality rights, damaging or similar nature in the nature of all kinds of financial content, legal, criminal and administrative responsibility for the content of the sender member / members are belong.
Related News