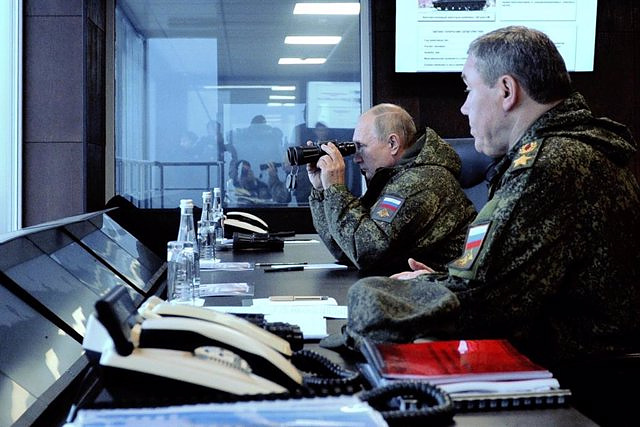 Russian President Vladimir Putin attended one of the seven training camps in which large-scale joint military exercises with China, India, Belarus and other Asian countries are taking place on Tuesday.

The Russian president has observed part of these exercises from the command post, together with the Minister of Defense, Sergei Shoigu, and the Chief of the General Staff of the Russian Armed Forces, Valery Gerasimov, with whom he will also meet behind closed doors, according to the TASS news agency.

The 'Vostok 2022' exercises, which will take place until tomorrow under the leadership of the chief of the General Staff of the Russian Armed Forces, involve more than 50,000 soldiers and more than 5,000 weapons and military equipment, as well as 140 aircraft and 60 warships, boats and ships.

During the exercises, the coalition troops must carry out joint tasks for the "practical development of defensive and offensive actions", simulating "keeping peace", protecting "common interests" and ensuring military security" in the region.

The drill includes the participation of the Armed Forces of countries such as China, India and Belarus, as well as Azerbaijan, Algeria, Armenia, Kyrgyzstan, Mongolia and Tajikistan. Nicaragua, Syria, Kazakhstan and Laos are also part of the training.

‹ ›
Keywords:
ChinaIndiaRusiaVladimir PutinBielorrusia
Your comment has been forwarded to the administrator for approval.×
Warning! Will constitute a criminal offense, illegal, threatening, offensive, insulting and swearing, derogatory, defamatory, vulgar, pornographic, indecent, personality rights, damaging or similar nature in the nature of all kinds of financial content, legal, criminal and administrative responsibility for the content of the sender member / members are belong.
Related News