His defense believes that this typo could favor his interests. 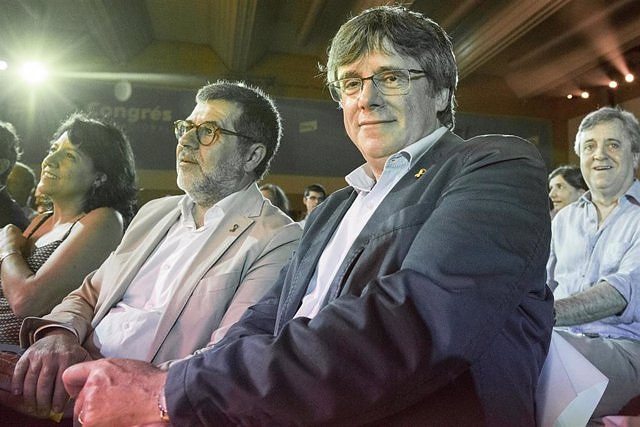 His defense believes that this typo could favor his interests

The former Catalan president Carles Puigdemont has managed, through his team of lawyers, to introduce a correction for a translation error in the conclusions made by the General Advocate of the Court of Justice of the European Union (CJEU), who estimated in July that the Belgian Justice cannot reject the delivery of those accused by the 'procés' claimed by the Spanish Supreme Court (TS).

The Advocate General's conclusions are not binding but are usually followed by the CJEU. In his opinion, Jean Richard de la Tour considered that Belgium cannot question the powers of the Supreme Court as the authority to issue European surrender orders, based on the risk that its fundamental rights will be violated if it does not demonstrate systemic and generalized deficiencies in Spain.

The General Advocate of the CJEU analyzed in his conclusions the framework decision 2002/584, which establishes the rules of the European orders and whose interpretation revolves around the question presented by the instructor of the Catalan 'procés', Pablo Llarena.

Puigdemont's defense noted a translation error in a footnote to De la Tour's brief, according to El Confidencial and legal sources confirmed to Europa Press.

For Puigdemont's representatives, this error could have consequences in favor of their interests in the final decision adopted by the CJEU, whose judges support the Lawyer in the vast majority of cases.

With his opinion, the Attorney General was in tune with the magistrate of the Supreme Court Pablo Llarena, instructor of the 'procés' and who addressed a preliminary ruling to the CJEU in March 2021 after the Belgian Justice refused to hand over to the Spanish authorities the former Minister Lluís Puig for considering that the competent court to demand his extradition should be the Superior Court of Justice of Catalonia instead of the Supreme Court and that if he is handed over to Spain, fundamental rights such as the presumption of innocence could be put at risk.

Llarena went to the European Justice to clarify both the scope of the issuance of the European Arrest and Surrender Orders (OEDE) issued by the Supreme Court against several politicians prosecuted for their role in the pro-independence 'procés' in Catalonia, including the former president of the Generalitat Carles Puigdemont, as the reasons for denying the execution of those European orders.

The European Lawyer recalled in his opinion the "principle of mutual trust" between the Member States of the EU that prevails in judicial matters, defending it as an element "of capital importance" that must be fully applied to protect the space without borders within the organization community and simplify judicial cooperation to "fight against impunity".

He also warned that in order to deny a European warrant due to risk to the fundamental rights of the defendant, the judicial authority that rejects it must demonstrate with "objective, reliable, precise and duly updated data, the existence of a real risk" due to "systemic or widespread" in the functioning of the judicial system of the issuing Member State.

Regarding the powers of the Supreme Court to demand the delivery of the defendants, the Lawyer pointed out that the framework decision that establishes the rules of the European orders does not allow the Belgian courts to decide whether an issuing judicial authority is competent or not.

Otherwise, according to him, the principle of procedural autonomy under which the Member States can designate in their national law the competent judicial authority to issue the EAWs and the principle of mutual recognition, which is the "cornerstone" of judicial cooperation between EU countries.

Puigdemont's defender, Gonzalo Boye, reacted to the opinion of the European Lawyer stating that it is a "denial" of "fundamental rights as individual rights, assuming that it is only when there is a generalized and systemic violation that they can be taken into consideration as a cause for deny a delivery.

Boye explained that "these conclusions do not imply a future delivery of the exiles", but rather "simply" force them to make a greater evidentiary effort in their opposition to the European orders.

‹ ›
Keywords:
BélgicaCarles PuigdemontTribunal SupremoUETribunal De Justicia De La Unión Europea
Your comment has been forwarded to the administrator for approval.×
Warning! Will constitute a criminal offense, illegal, threatening, offensive, insulting and swearing, derogatory, defamatory, vulgar, pornographic, indecent, personality rights, damaging or similar nature in the nature of all kinds of financial content, legal, criminal and administrative responsibility for the content of the sender member / members are belong.
Related News