Public debt rises again in July and rebounds to the historical maximum of 1,486 billion

The increase is due to the rise in indebtedness of the State and municipalities, while it decreases in the communities. 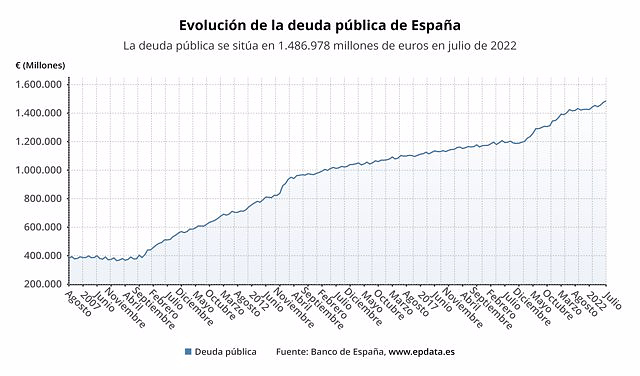 The increase is due to the rise in indebtedness of the State and municipalities, while it decreases in the communities

The debt of all public administrations reached 1.486 trillion euros in July, a new all-time high, after growing by 0.8% in the monthly rate, for which it has been on the rise for three consecutive months, according to data published this Tuesday by the Bank of Spain.

In the last year, public debt has grown by 5%, with 70,805 million euros more, as a result of lower income and higher expenses derived from the pandemic crisis and more recently due to the war in Ukraine.

The increase in debt in July is mainly due to the growth in State debt, which has had to make an extra spending effort due to the impact of the crisis, as well as that of local corporations.

On the contrary, the autonomous communities and the Social Security Administrations saw a slight reduction in their indebtedness during the month of July.

Local corporations also increased their debt in July, by 1.1% compared to June, to 23,100 million euros, while in the interannual rate the increase is 2.8%.

For their part, the autonomous communities reduced their debt in July by 0.7% compared to the previous month, to 314,321 million euros, but raised it by 1% compared to July 2021.

Finally, the debt of the Social Security administrations remained stable in the seventh month of the year, up to 99,184 million euros, only one million less than in June.

However, in year-on-year terms, that is, compared to July 2021, the Social Security debt has skyrocketed by 8%, due to the loans granted by the State to finance its budget deficit.

‹ ›
Keywords:
Banco De España
Your comment has been forwarded to the administrator for approval.×
Warning! Will constitute a criminal offense, illegal, threatening, offensive, insulting and swearing, derogatory, defamatory, vulgar, pornographic, indecent, personality rights, damaging or similar nature in the nature of all kinds of financial content, legal, criminal and administrative responsibility for the content of the sender member / members are belong.
Related News