PP offensive in C-LM, Aragón, Extremadura and Valencia so that PSOE 'barons' say "enough is enough" to Sánchez

Gamarra, Bendodo, Tellado and Rollán travel to these Autonomous Communities to warn 'barons' and PSOE deputies that if they do not rebel they are "accomplices". 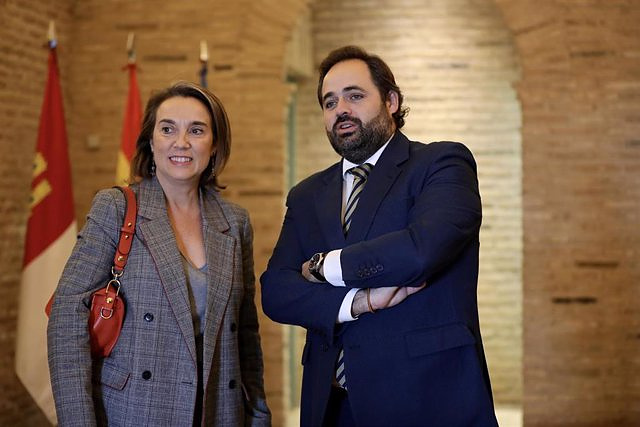 Gamarra, Bendodo, Tellado and Rollán travel to these Autonomous Communities to warn 'barons' and PSOE deputies that if they do not rebel they are "accomplices"

The Popular Party has coordinated this Tuesday its main leaders to materialize an offensive against the PSOE in Castilla-La Mancha, Aragón, Extremadura and the Valencian Community with the aim that the 'barons' and deputies of the PSOE say "enough is enough" to the Chief Executive, Pedro Sánchez, before the repeal of the crime of sedition.

The leader of the PP, Alberto Núñez Feijóo, already announced this Monday before the Executive Committee of his party that they will present a proposal in Congress to maintain sedition in the Penal Code and classify the call for an illegal referendum. The 'popular' want this initiative to serve so that the PSOE parliamentarians break the voting discipline and plant Sánchez.

And this Tuesday it has sent its main leaders to territories governed by the PSOE as a "pressure" strategy, arguing that if the "barons" and socialist deputies do not rebel they will be "accomplices" of Pedro Sánchez.

Thus, the general secretary of the PP, Cuca Gamarra, has traveled to Toledo, where the socialist Emiliano García-Page governs; the general coordinator of the party, Elías Bendodo, has traveled to Zaragoza to remind Javier Lambán, president of this autonomy, of this message; the deputy secretary of Organisation, Miguel Tellado, has arrived in Valencia, where the socialist Ximo Puig has the baton; and the Deputy Secretary for Regional and Local Coordination of the PP, Pedro Rollán, has been in Cáceres, an autonomous community governed by Guillermo Fernández Vara.

From Toledo, accompanied by the president of the party in Castilla-La Mancha, Paco Núñez, Gamarra has appealed to the "conscience" of both García-Page and that of the nine deputies they have in the Congress of Deputies to " rebel" against Pedro Sánchez's intention to repeal the crime of sedition.

"They have to say if they are willing for sanchismo to devour socialism and anything else so that Sánchez continues in Moncloa. If they do so, they will be accomplices and as responsible as Sánchez," Gamarra warned, in statements to the media before the gates of the Cortes of Castilla-La Mancha.

In Zaragoza, Bendodo has warned that the independentists are not satisfied "with a single payment" and the "blackmail" began with the sedition, now it continues with the modification of the crime of embezzlement and the next thing will be to talk about the referendum again.

"Tell your deputies that for consistency they vote against the repeal of sedition and the modification of embezzlement," Bendodo asked Lambán, to emphasize that "Spain cannot kneel before those who want to break it."

In Valencia, Tellado stressed that Ximo Puig must "assert" the strength of his 10 deputies in Congress to tell Sánchez "enough is enough" and stop the repeal of sedition. "If he does not do it, he will be an accomplice in this violation of justice and the rule of law," he added, to point out that today he cannot be by Pedro Sánchez's side and defend the rule of law in Spain.

From Cáceres, Pedro Rollán has asked the president of Extremadura to defend "the interests of Extremadura against those of Sánchez" and his deputies vote against the repeal of the crime of sedition.

In his opinion, Vara has "the responsibility and the opportunity to convene his five deputies in Congress to tell him that above the political interests of Sánchez, of a single person, they must put the interests of Extremadurans and Spaniards, the interests of the Nation".

The 'popular' reject the motion of censure against the head of the Executive that Cs and Vox defend. In the last few hours, the leader of Vox, Santiago Abacal, has raised the tone against Feijóo for his response to the Government's proposal to eliminate the crime of sedition and "flatly" reject joint actions against Pedro Sánchez, such as the presentation of a motion of censorship or demonstrations in the streets.

Bendodo has stated that the real motion of censure will be presented on May 28 throughout the country. "It will be then when all Spaniards speak with his vote; everything else is to heat up the circus for Sánchez," he emphasized.

The general secretary of the PP has also ruled out the motion for questions when asked about this issue. As she has pointed out, the motions "are raised to win them, not to strengthen the Government."

"It will be the Spaniards at the polls who will carry out that motion of censure against Pedro Sánchez. The Spaniards do not deserve to have a suit tailored to criminals so that Sánchez remains in power", added Gamarra, who has specified that the PSOE did not include this reform in its electoral program, and therefore it has not been endorsed by the Spanish.

‹ ›
Keywords:
Pedro SánchezPSOEPP
Your comment has been forwarded to the administrator for approval.×
Warning! Will constitute a criminal offense, illegal, threatening, offensive, insulting and swearing, derogatory, defamatory, vulgar, pornographic, indecent, personality rights, damaging or similar nature in the nature of all kinds of financial content, legal, criminal and administrative responsibility for the content of the sender member / members are belong.
Related News