Feijóo has lunch with his presidents after the Executive Committee, where Ayuso once again blamed the left for the demonstration in Madrid. 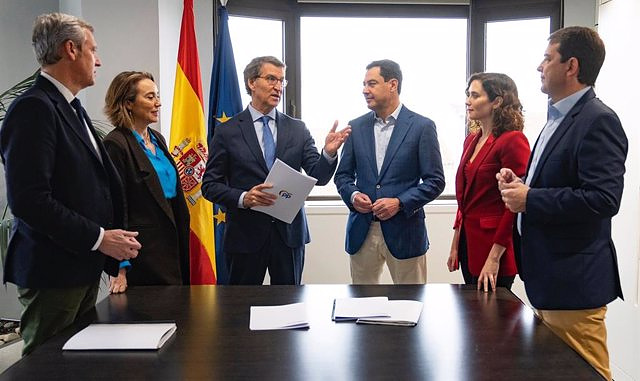 Feijóo has lunch with his presidents after the Executive Committee, where Ayuso once again blamed the left for the demonstration in Madrid

The 'barons' of the PP have visualized this Monday a closing of ranks with the leader of the party, Alberto Núñez Feijóo, after the decision of the Government to repeal the crime of sedition and have agreed to reject the motion of censure proposed by Vox and Cs, as sources present at the subsequent lunch have indicated to Europa Press.

Feijóo has held an informal and relaxed lunch with the presidents of the PP after the meeting of the Executive Committee and there again the penal reform has been one of the main topics of conversation because, as they have agreed, "this matter matters a lot to the people of the street".

Given the fact that the Government is opening the door to modify the embezzlement together with the crime of sedition, PP sources consider that Pedro Sánchez seeks with this possible change to open the door to favor those convicted of the EREs, among them the former president of the Junta de Andalucía José Antonio Griñán. Of course, in the ranks of the PP they warn that this modification of the non-profit embezzlement can also affect countless mayors who were once convicted of that crime and could not stand for election.

At lunch, the focus was on parliamentary action with measures such as the proposal that the Popular Group will take to Congress so that the PSOE deputies "take a picture", rejecting initiatives such as the motion of censure defended by Vox and Cs, or the citizen mobilization that Santiago Abascal calls.

"We have to go our own way and follow our path and our strategy," one of the people attending the lunch told Europa Press, who sees the motion of censure as an "occurrence" and also rules out the demonstration on the street that away from moderation.

Sources from the leadership of the PP have indicated that neither Vox nor Cs are going to "set the agenda" for Feijóo and have criticized that Inés Arrimadas's argument for presenting the motion of censure is that it would help to slow down the processing of the motion for a couple of months. bill that PSOE and Podemos have presented. In 'Genoa' they consider that the way at this time should be to "pressure" the deputies and socialist positions so that they position themselves with their vote and there they frame the proposal that Feijóo has announced.

As he did last Friday in a solemn appearance before the media, Feijóo has announced that if he wins the elections, he will maintain the crime of sedition in the Penal Code and will incorporate that of calling an illegal referendum.

"We will be up to the task in defense of a great country," he wrote this afternoon on his official Twitter account, a message that was accompanied by a photo with Isabel Díaz Ayuso, Juanma Moreno, Alfonso Rueda, Alfonso Fernández Mañueco and Cuca Gamarra.

After Feijóo's speech -which the media have been able to follow-, the turn of interventions behind closed doors has opened, where the president of Madrid, Isabel Diaz Ayuso, has spoken, who has alluded to the massive protest in defense of public health that was held this Sunday in Madrid.

Ayuso has assured before the PP staff that this demonstration obeys the political mandate of the left, fundamentally from Más Madrid, according to what 'popular' sources have pointed out to Europa Press. Feijóo has made no mention of the health protest and has focused on eliminating the crime of sedition and demanding explanations for the Melilla tragedy last June.

Sources from Feijóo's team have later highlighted that there is a problem with primary care throughout Spain. Regarding the Madrid demonstration, they have pointed out that a part of that protest was "agitated by political parties", which make "political use" of this matter, but they have avoided entering into more assessments, assuring that the competence in health matters is of the Community of Madrid and each autonomy has its concrete reality.

During the meeting of the Executive Committee, the new president of the PP of La Rioja, Alberto Galiana, who made his debut this Monday in this type of organic forum, and the still president of the PP Navarro, Ana Beltrán, who wanted to say goodbye of his colleagues before the imminent regional congress, in which the regional deputy Javier García will replace him.

Ana Beltrán, who was also the Deputy Secretary of Organization of the PP during Pablo Casado's mandate and will now continue as a national deputy in Congress, received applause from those attending after her speech. Both Feijóo and Cuca Gamarra have thanked her for her work and her generosity, according to party sources.

Several presidents of the PP have been absent from the meeting of the National Executive Committee, such as the Murcian Fernando López Miras -the King went to his community-, the president of Ceuta, Juan Jesús Vivas, and the Catalan Alejandro Fernández.

The Andalusian Juanma Moreno, has been the earliest riser, since he has arrived in Genoa first thing in the morning, but then he has been one of the first to leave, since he had to catch a plane to Egypt to participate in the world summit of the climate.

‹ ›
Keywords:
FeijóoPPMoción De CensuraVOX
Your comment has been forwarded to the administrator for approval.×
Warning! Will constitute a criminal offense, illegal, threatening, offensive, insulting and swearing, derogatory, defamatory, vulgar, pornographic, indecent, personality rights, damaging or similar nature in the nature of all kinds of financial content, legal, criminal and administrative responsibility for the content of the sender member / members are belong.
Related News