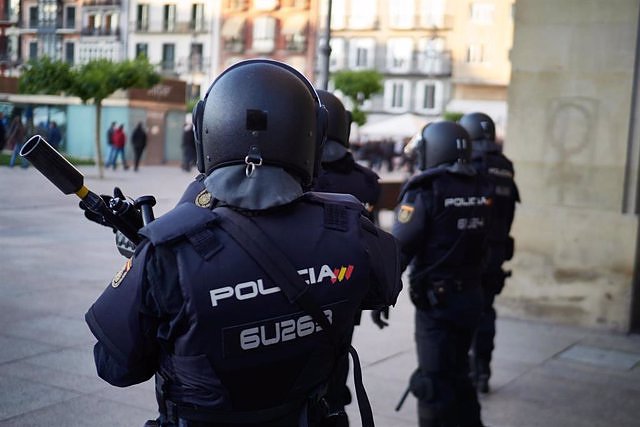 Government partners maintain their pressure against the use of rubber bullets, a regulatory riot control material that has been used in this legislature on 46 occasions by the National Police (22) and the Civil Guard (24).

The elimination of rubber balls is one of the "red lines" that EH Bildu and ERC have marked out within the negotiation to reform the Citizen Security Law, known by its detractors as the 'gag law'. It was approved in 2015 by the PP and PSOE and Unidas Podemos agreed that they would modify the norm.

At the end of September, these two formations and Unidas Podemos recognized that the PSOE's 'no' prevented the elimination of rubber bullets as riot gear. It was in Congress after hosting the presentation of the report 'Stop rubber bullets', promoted by Iridia and Novact collecting testimonies from various victims of these projectiles.

The groups also expressed their doubts about the 'foam', the material used by the Mossos d'Esquadra in Catalonia as an alternative to being in theory less harmful, something that the aforementioned civil organizations question. This Friday the Commission for the Study of the Police Model of the Catalan Parliament has approved reviewing its use, refusing to create an external control mechanism for police actions.

The use of riot gear was also censored by government partners when they traveled to Melilla on November 7 in the displacement of spokesmen for the Interior Commission for the tragedy next to the fence on June 24 in which at least 23 migrants.

Specifically, ERC denounced the actions of the Civil Guard along the border perimeter, focusing on the use of 65 rubber bullets, 270 salvoes, 28 smoke canisters, 86 tear gas canisters and 41 pepper spray canisters. The Ministry of the Interior, for its part, defended the police action to repel what it described as a "very violent attack."

In the act of presenting the report 'Stop rubber bullets', the deputy of Podemos Enrique Santiago advocated for further progress in the reform of the 'gag law' to recover "restricted rights" with the norm approved in 2015 with the absolute majority of the pp.

"There is not a majority, far from it, for their elimination," said Santiago, referring to the rubber balls. In his opinion, no riot control material --including smoke canisters-- should be used to break up demonstrations, nor should citizens be fined for disobedience to authority based on "subjective criteria."

María Carvalho Dantas, from ERC, requested in that act at the end of September that the elimination be mentioned "expressly" in the new articles of the 'gag law', "finding a way to prohibit them". The deputy of EH Bildu Jon Iñarritu also insisted that it is a "red line" to support the reform of said law.

The CUP and Junts, for their part, lamented that "police corporatism and resistance from the Ministry of the Interior" prevented the elimination of rubber bullets as riot control material.

‹ ›
Keywords:
Guardia CivilPolicía
Your comment has been forwarded to the administrator for approval.×
Warning! Will constitute a criminal offense, illegal, threatening, offensive, insulting and swearing, derogatory, defamatory, vulgar, pornographic, indecent, personality rights, damaging or similar nature in the nature of all kinds of financial content, legal, criminal and administrative responsibility for the content of the sender member / members are belong.
Related News