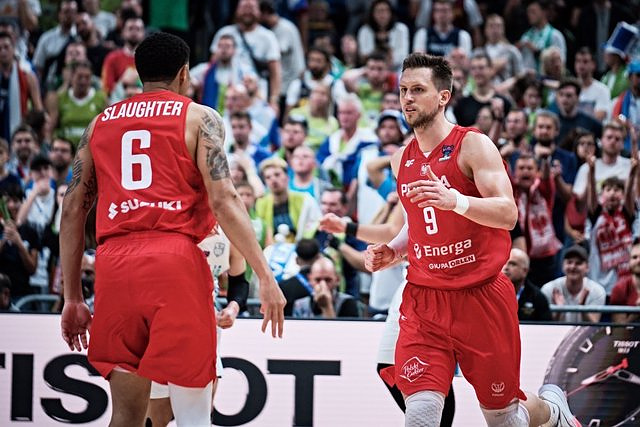 The Polish national team gave another surprise this Wednesday in this Eurobasket 2022 and finished off the current champion, a Slovenia that they defeated 87-90 thanks to a magnificent first half, and will be cited for a place in the final this Sunday with France, who also suffered to get rid of Italy 93-85 after extra time.

Of the five main favorites that FIBA ​​indicated before the tournament, only the French team remains, after Slovenia, against all odds, fell to the Poles, who signed a first half to remember and then knew how to hold the reaction with integrity of character of Luka Doncic and company.

The Dallas Mavericks star did not have his best night and stayed at 14 points, with a discreet 5/15 shot, and six turnovers, unlike a huge Mateusz Ponitka, author of a sensational 'triple-double' with 26 points, 16 rebounds and 10 assists.

16 of the former Tenerife player's points came in the first 20 minutes where Poland disarmed the Slovenians, who at half-time saw themselves practically lost in the semi-final (39-58). But Slovenia showed their character as champions, who pressed on defense and endorsed their rival 24-6 in the third quarter to recover all their options (63-64).

Poland then knew how to have a cool head and recover their best basketball for the final ten minutes, without being intimidated when the Slovenian team took the lead (73-68). He opened a new important gap and knew how to hold the final reaction of the champion.

His rival for a place in the final will be France, who also sweated his ticket against Italy, against whom he needed an extension to defeat them 93-85, led by the best version of Thomas Heurtel, author of 20 points and 8 assists, and for another little 'help' from his rival from the free kick.

The current Olympic runner-up suffered to get rid of the troop of the charismatic Gianmarco Pozzecco, with morale through the roof after having left Serbia on the road. The Italians were not at their best offensive level in the first 20 minutes, but managed to stop their rival in a poor second quarter (11-11) to stay alive (38-31).

However, Italy unleashed an offensive gale after passing through the locker room and turned the score around. A partial of 18-31 gave him the lead and made him dream of another 'bell', and although France resisted with the actions of Heurtel at 14 seconds he was on the ropes.

At 75-77, Simone Fontecchio, who was being the best of his team, had two free throws to almost sentence, but as happened to the Turkish Cedi Osman in the round of 16, he did not hit any and the former Real Madrid base forced an extension where the Vincent Collet gave no options.

‹ ›
Keywords:
PoloniaEsloveniaItalia
Your comment has been forwarded to the administrator for approval.×
Warning! Will constitute a criminal offense, illegal, threatening, offensive, insulting and swearing, derogatory, defamatory, vulgar, pornographic, indecent, personality rights, damaging or similar nature in the nature of all kinds of financial content, legal, criminal and administrative responsibility for the content of the sender member / members are belong.
Related News