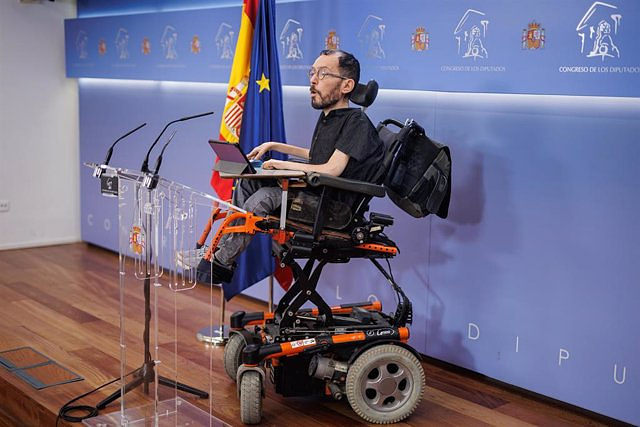 The spokesman for Unidas Podemos in Congress, Pablo Echenique, explained that the formation is studying amending the reform of the crime of aggravated public disorder if it limits the peaceful protest with which the Government proposes to replace the crime of sedition with which the leaders of 1-O.

"We are concerned that it could have some kind of limiting effect on the right to peaceful protest. We are studying it carefully, we have not yet made any decision," he reflected in an interview on La 2 and Ràdio 4 this Wednesday collected by Europe Press, considering that the new norm has edges.

He has also affirmed that they will study "very carefully" the proposal to reform the crime of embezzlement that ERC requires and has said that he is waiting for --literally-- a black-on-white proposal.

He has celebrated that the Government has collected the votes to approve the General State Budget (PGE) for 2023 and has considered that the Accounts will be ratified with a "very solid majority", in which he has trusted that ERC participate.

‹ ›
Keywords:
PodemosPablo Echenique
Your comment has been forwarded to the administrator for approval.×
Warning! Will constitute a criminal offense, illegal, threatening, offensive, insulting and swearing, derogatory, defamatory, vulgar, pornographic, indecent, personality rights, damaging or similar nature in the nature of all kinds of financial content, legal, criminal and administrative responsibility for the content of the sender member / members are belong.
Related News