He warns his partner that the agreement depends on his "political will" and insists on his refusal to increase military spending. 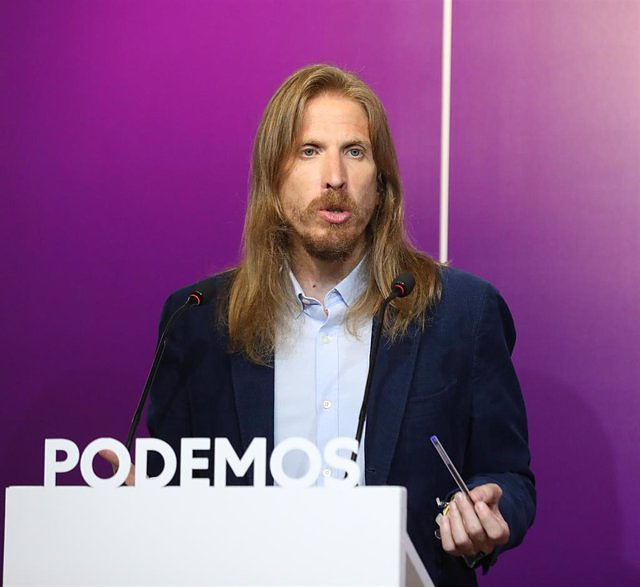 Podemos has stressed that they are speeding up the negotiations on the General State Budget (PGE) and has warned the PSOE that the agreement depends on its "political will" to assume several of its demands, such as unblocking the approval of the housing law, promoting the family law or definitively repeal the 'gag law'.

He has also reaffirmed that they remain "very clear" and that a budget pact cannot imply an increase in military spending.

The state co-spokesman for the purple formation, Pablo Fernández, has stated that both coalition partners are immersed in contacts about future public accounts and will rush "until the last minute." And in this sense, he has reported that the Government has already said that its intention was to be able to have them tomorrow and the next few hours may be key, without setting a time limit.

During his appearance, Fernández stressed that they have already managed to get the PSOE to agree to a tax reform that gets the rich to contribute more to maintain public services, something that was "strategic" for the confederal space and represents a "huge victory" .

Now, the challenge for Podemos is to get social spending to rise with some progress, such as reversing the "cuts" of the PP in terms of unemployment benefits, although the priority is to achieve measures such as a universal child-rearing income of 100 euros and extend the maternity and paternity leave, all within the family law.

In addition, it has put the focus above all on housing and, in this sense, they demand that the PSOE agree to approve the housing law with improvements, which has been stuck in Congress for eight months. Specifically, the leader of Podemos has explained that they are going to press "until the last moment" to guarantee rent regulation for all owners, the prohibition of evictions without a housing alternative for vulnerable families and to increase the public housing stock with flats from Sareb.

Moreover, Fernández has said that this aspect depends on the PSOE and its political will and has emphasized that "a progressive government cannot allow housing to be an inaccessible market good", with which "a few" speculate.

Therefore, he stressed that "understanding once and for all" that to ensure adequate access to housing it is "essential and essential" to pass a housing law.

The third proposal demanded from the socialist wing is the repeal of the 'Gag Law', since it is "inconceivable" and "unheard of" that it has been in force for longer with the PSOE than with the PP, when its partner also promised to reverse it in 2015.

For all these reasons, Fernández has insisted that the PSOE assume that it is required to be "more courageous and ambitious" also in housing, as has happened with the fiscal package and has motivated the "furious" criticism of the extreme right and the leader of the PP, Alberto Núñez Feijóo, whom he has called "unpatriotic" that great fortunes contribute more to the public treasury. "Feijóo is to patriotism what Vox is to feminism. Unfortunate," he has settled.

Consequently, the co-spokesman for Podemos has assured that "it is an incontrovertible cry" that before the price of rents and the rise in mortgages, measures are needed at the legislative level, to warn the PSOE that it is "seriously wrong" and it is " highly worrying" that in this field "he buys the agenda of the right and the extreme right with his anti-squatting amendment.

The issue of housing has been generating tensions between the partners for some time, since the purples want to introduce amendments to improve the text and that it can be approved by the investiture partners, while the PSOE has criticized that they intend to modify the consensus that was reached in the Minister council.

Therefore, the issue of housing will be one of the aspects that will support the dialogue between the negotiating teams. In turn, the possibility also opens up, as in previous years, that the chief executive, Pedro Sánchez, and the second vice president, Yolanda Díaz, intervene in the final phase for the last fringes of discrepancy.

‹ ›
Keywords:
Presupuestos GeneralesPSOEPodemos
Your comment has been forwarded to the administrator for approval.×
Warning! Will constitute a criminal offense, illegal, threatening, offensive, insulting and swearing, derogatory, defamatory, vulgar, pornographic, indecent, personality rights, damaging or similar nature in the nature of all kinds of financial content, legal, criminal and administrative responsibility for the content of the sender member / members are belong.
Related News