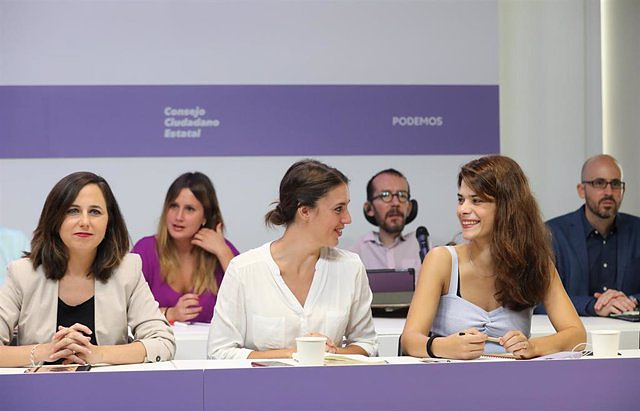 The state co-spokesperson for Podemos, Isa Serra, acknowledged this Monday that "progress has been made" in the negotiation of public accounts for next year, although she has warned that the increase in the public budget "cannot go" aimed at Defense spending, but rather "must be used for social investment and to reduce inequalities".

This is how Serra stated in an interview with Radiocable, collected by Europa Press, in which, asked about the negotiation in the General State Budgets (PGE), he admitted that these advances have been achieved thanks to the tax reform approved by the coalition government.

In this sense, the spokeswoman for Podemos has stressed that, although the economic consequences of the war in Ukraine must be resolved, public spending cannot be used for more military spending. "We are at a time when structural progress must be made in our country to reduce inequalities," she added.

Likewise, Serra has insisted that the Government must comply with two commitments that it has maintained with citizens "for a long time", which are the repeal of the 'gag law' and the approval of the housing law.

Specifically, he has highlighted the "fundamental" of the housing law because "it is a priority" and Spain "is very late" in this matter. Therefore, he has advocated lowering rental prices and stopping evictions without a housing alternative, as well as expanding the public housing stock.

In addition, the state co-spokesperson has criticized that the PSOE has proposed an amendment to speed up the evictions of 'squatters' within 48 hours. "It is amazing that the PSOE has now raised these express evictions when what needs to be done is to move forward to guarantee the right to housing," he has sentenced.

In his words, what is done with this type of approach is "buying the right-wing agenda" and feeding the belief that the housing problem in Spain "is 'squatting' and not vulture funds."

"It's looking for a scapegoat," he added, while reiterating that lowering the rental price is the real need in this country because it is the vulture funds who speculate by raising prices.

‹ ›
Keywords:
Presupuestos GeneralesPSOEPodemos
Your comment has been forwarded to the administrator for approval.×
Warning! Will constitute a criminal offense, illegal, threatening, offensive, insulting and swearing, derogatory, defamatory, vulgar, pornographic, indecent, personality rights, damaging or similar nature in the nature of all kinds of financial content, legal, criminal and administrative responsibility for the content of the sender member / members are belong.
Related News