Podemos insists on reversing the contract to buy new mobiles from deputies: "It's a whim"

Insist on looking for an alternative to acquire models with similar features and for half the cost. 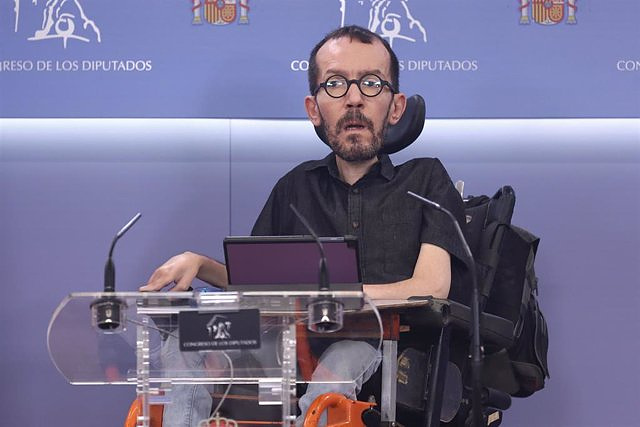 United We Can has demanded that the Congress Table rectify and not formalize the contract for the acquisition of new mobiles for the deputies and staff of the Chamber, considering that it is a "whim" given that the terminals are "unnecessarily expensive" and demands that buy models with similar features and half the price.

This is stated by the spokesman for the confederal group, Pablo Echenique, in a letter sent to the governing body of Congress, in which he urges to seek "all legal alternatives to rectify" the acquisition of these mobiles.

In that letter, to which Europa Press has had access, Echenique argues that the public sector contract law itself allows the contract not to be concluded, even if there is a tender, as long as it is justified "for reasons of public interest." "This could be one path and we understand that there could be others if there is the political will to pursue them," she reasoned.

In turn, the leader of the purple formation reflects that "he is not in favor of the anti-political discourse" carried out, in his opinion, by the right and the extreme right on aspects with the use of official cars and planes for government activities, or the "advisors" refrain.

And it is that United We Can maintains that this discourse comes from "traditionally corrupt parties that seek to equate their criminal activities and the theft of public money with the effective performance of political representation", which come to equate "bonuses in B of bribes or illegally finance electoral campaigns with traveling in a government-owned vehicle or having a sufficient human team to be able to carry out the task of representation effectively".

However, Echenique makes it clear that the case of the purchase of these mobiles is not part of this "right-wing populist" discourse, because there are objective elements to brand the provision of terminals as "whim."

"The question is very simple, although it is evident that the deputies have to have a modern and secure terminal to carry out their activity, it is also evident that there is no material reason why this terminal has to be the latest iPhone model There are mobile phones with comparable technical characteristics that are worth half that of said model."

The Table of Congress rejected last week the request made by Ciudadanos for the chamber to annul said contest with the votes of the PSOE, the PP and the deputy of Podemos Gloria Elizo, while the other two members that the confederal group has in this body They have supported its annulment, as has the Vox deputy Ignacio Gil Lázaro.

The opening of the contest was unanimously approved before the summer both in the Congress Table and in the Contracting Board, of which the four vice presidents of the Chamber are part, but after transcending the decision to dedicate more than one million euros to the purchase of the latest generation iPhone that exceed 1,000 euros per terminal in the market, controversy arose.

From Citizens they asked to annul the contract and they already announced that, if it went ahead, their deputies would give up the new phones. United We Can advocated the position of acquiring cheaper models.

In this context, the revision of the specifications to buy cheaper mobiles or with an alternative operating system to Apple's was defended by both Javier Sánchez Serna (Podemos) and Gerardo Pisarello (En Comú). However, the third vice president, also from Podemos, Gloria Elizo, maintained her position in favor of the contract as it is and has voted against the Ciudadanos brief. Elizo thus reaffirmed the position that she also held in similar tenders in both 2017 and 2018.