Echenique stresses that the matter has "edges" and requires in-depth debate while Santiago defends the change for legal certainty. 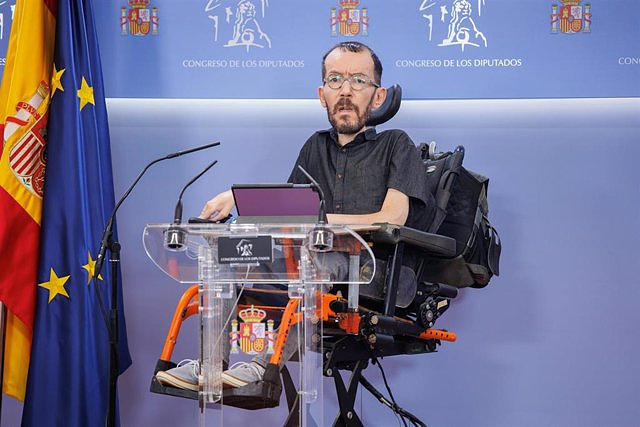 The spokesman for United We Can in Congress, Pablo Echenique, has assured that the purple formation has not decided whether to support a reform of the crime of embezzlement, stressing that it is a "delicate issue" with many "edges" and that it requires an internal debate within the parliamentary group.

However, the deputy spokesman and leader of the IU, Enrique Santiago, has shown himself in parallel to be in favor of modifying this crime, arguing that it is a matter of "legal certainty" to differentiate what is inefficient management of public resources and personal enrichment. , i.e. "steal".

In turn, the leader of En Comú Podem, Jaume Asens, was also yesterday in favor of changing the wording of the crime of sedition in the Penal Code, to reduce the penalties provided for the crime of embezzlement in the event that there is no personal enrichment.

At a press conference in Congress, Echenique has shown the internal difference within the confederal group regarding the possible review of the crime of embezzlement and has been cautious when it comes to providing support for this proposal.

In this sense, he has explained that the legal team of the purple formation is studying this matter "very carefully" and that when there is a formal proposal to change the crime of embezzlement, there will be an internal dialogue between all the branches of United We Can.

And it is that Echenique has reported that, although the repeal of the crime of sedition is good news, entering the redefinition of embezzlement has "edges that are not lost on anyone." In this sense, purple sources allude to the effects in other cases beyond the leaders of the 'procés' that must be taken into consideration.

In fact, and after being asked if they will display their own proposal on embezzlement, he has insisted that this matter has not been raised and has circumscribed Asens's support for revising this crime in his "opinion" as a "jurist of recognized prestige or En Comú Podem".

Meanwhile, Santiago has differed from the opinion of the parliamentary spokesman and defending that, within the framework of the reform of the crime of sedition, it seems "quite convenient to adapt other criminal types" that are not properly adapted to the current reality.

At this point and with the change in the crime of embezzlement, the IU deputy has made it clear that the current Executive does not legislate "hot" with the sedition reform, unlike the PP during its time in the Executive, and that simply adapt the Criminal Code to the requirements of Europe, within the framework of an adaptation of the community legislative framework. In any case, he has recalled that it is a reform of an organic law that requires an absolute majority consensus, for which the support of many groups in the chamber must be gathered.

Therefore, he has cleared "any temptation" on the part of the opposition to say that this change satisfies private interests, in reference to those condemned by the 'procés', but rather that it meets the criteria set by the EU.

Questioned about the limits that the reformulation of the crime of embezzlement should have, Santiago has insisted that it is necessary to differentiate "basic" that they want to establish: the inadequate management of public resources and personal enrichment, which in this case must have another type of criminal responsibilities.

And in the case of the convicted independence leaders, the PCE Secretary General has also emphasized that the Supreme Court made it clear that in this case there was no personal appropriation of public resources. "It is an issue of legal certainty proper to the rule of law," Santiago concluded.

Regarding the issue of sedition, Echenique has supported the elimination of the crime of sedition because it helps to resolve the Catalan conflict by peaceful means, but has insisted that there is "concern" about the possible impact of the new type of aggravated public disorder, which is causing divergence of opinion among jurists.

In this regard, it has revealed that they are also carrying out a legal analysis of the matter and it has not yet been decided whether they will present amendments to safeguard, if necessary, social mobilization, of which they make a "staunch defense" as a party that emerged in the heat of the 15 M.

At this point, Santiago has also said that there are obviously "complicated red lines" in matters that have to do with freedom of demonstration and disturbance of public order, since they are not "simple" legislative techniques.

And in this regard, it has guaranteed that United We Can are open to studying and attending to proposals made by social groups and organizations, always with the interest of improving the norm.

A matter in which Asens yesterday does not perceive danger, reasoning that civil disobedience and peaceful demonstrations are not altered by these changes.

Finally, Echenique has pointed out that Podemos regularly talks with the second vice president and that Asens personally transferred some elements of the repeal of sedition to her, but has reiterated, as the purple formation explained yesterday, that they did not know the content of the bill and Consequently, they did not participate in the negotiation.

This issue has once again shown the internal tension within the confederal space, since Asens explained that due to discretion, no details had been provided so that there would be no leaks. In turn, Díaz contacted Belarra last Thursday to inform him of the pact and Podemos sources specified that this call took place shortly before the announcement of the reform, and that the document of the parliamentary initiative came to them later.

Some voices in the space question the method chosen to negotiate has not been the right one and that the general secretary of Podemos was not also immersed. And it is that they emphasize that a dialogue with all the parts of the space would deepen in the consensus and facilitates having proposed more suggestions and changes, intuiting that the text was already very articulated between PSOE and ERC.

‹ ›
Keywords:
IUPodemosPablo Echenique
Your comment has been forwarded to the administrator for approval.×
Warning! Will constitute a criminal offense, illegal, threatening, offensive, insulting and swearing, derogatory, defamatory, vulgar, pornographic, indecent, personality rights, damaging or similar nature in the nature of all kinds of financial content, legal, criminal and administrative responsibility for the content of the sender member / members are belong.
Related News