He stresses that there is a "political" campaign against Montero and makes some socialist ministers ugly who did not close ranks with the law. 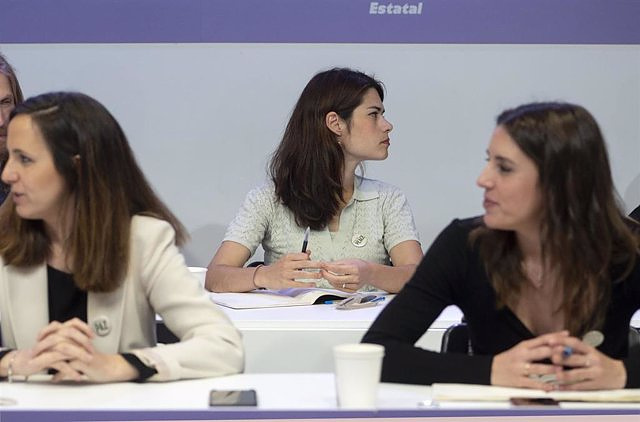 Podemos has assured that it does not make any criticism of the second vice president, Yolanda Díaz, in her position in the controversy surrounding the Law of 'only yes is yes', nor does it consider that the message of its former leader Pablo Iglesias calling it "cowardly " and "miserable" to those who stand in profile before the "attacks" on the Minister of Equality, Irene Montero, are directed at the head of Labor.

And, furthermore, he has reaffirmed his firm will to reach an electoral coalition with the 'Sumar' platform, promoted by Díaz, and that they will continue to defend a candidacy for unity on the left.

This was stated at a press conference by the state co-spokesperson for the purple party, Isa Serra, to emphasize that this controversy reveals a "political campaign" against Montero, mainly through the media and some judicial associations, with an "unprecedented attack" on the Ministry of Equality.

Regarding the commotion generated by Iglesias' tweet last Friday, which reproached that "colleagues" did not react in defense of Montero in the face of the "hunt" he suffered, Serra stressed that he has seen "many headlines that do not honor the truth". , especially when he has read that message and Díaz is not quoted at any time.

Moreover, he has insisted that the purple formation has not reproached the second vice president and that his position of waiting for the Supreme Court to unify doctrine, before the resolutions of sentence reductions with the entry of the regulations, is the same of the party and it has also been made explicit by the President of the Government, Pedro Sánchez.

Of course, he has stressed that "any democrat" understands that this campaign against Equality exists, which exceeds the space of United We Can and is directed above all before feminist advances. As an example, he has given the position of groups such as the Professional Association of the Magistracy, which has requested the resignation of Montero and appreciates, with it, a "political" interest in a corporate way.

However, Serra does think that there are cases of people who have put themselves in profile before the "virulence" of the campaign that supports Equality and, specifically, has reproached that they do not share the position of socialist ministers questioning the need to reform the law, although they are now backing down.

‹ ›
Keywords:
Pablo IglesiasPodemosIrene MonteroYolanda Díaz
Your comment has been forwarded to the administrator for approval.×
Warning! Will constitute a criminal offense, illegal, threatening, offensive, insulting and swearing, derogatory, defamatory, vulgar, pornographic, indecent, personality rights, damaging or similar nature in the nature of all kinds of financial content, legal, criminal and administrative responsibility for the content of the sender member / members are belong.
Related News