PNV believes that the Government will "vent" the suppression of sedition before Christmas, which it will support, but doubts about embezzlement 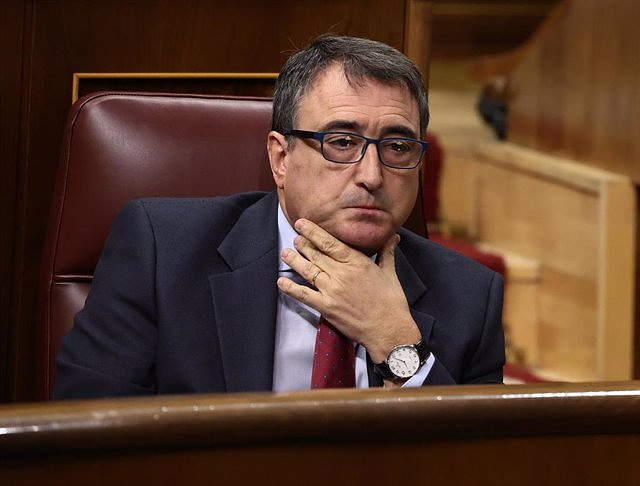 The PNV spokesman in the Congress of Deputies, Aitor Esteban, believes that the government of Padro Sánchez will "vent" before Christmas the suppression of the crime of sedition, which the jeltzales will support, but they doubt what they will do with the supposed reform of embezzlement because they do not know how it would be raised. "When that bridge arrives, we will see if it is crossed or not, and how we cross it", he has assured.

In an interview with Onda Vasca, collected by Europa Press, Esteban has considered that the Executive is "interested" in "venting" before Christmas the elimination of the crime of sedition to replace it with that of aggravated public disorder, for which reason the processing " It'll be done pretty quickly."

In his opinion, this criminal type was "a mixture of everything, which does not resemble anything assimilable in the European framework, and the Spanish judges have been able to verify it when making extraditions." "There is no one who could compare exactly what the crime of sedition was with others that existed in other European countries, which had been reformed, retouched, while the concept in the Spanish Code maintained that of the last century," he added.

For this reason, he explained that it had to be "touched up" because it did not make sense that the penalties "were so high." "And although there is no unanimity, there is a majority consensus in Catalonia that this can help improve the political climate and that certain political actors can truly once again have the capacity to dialogue and start a new time. In that sense, we support it. We are going to support," he stressed.

Regarding the possibility of reforming the crime of embezzlement, he said that they do not know "what it will consist of." "We are not going to take an initiative in this sense and I do not know exactly what the Catalan parties or the PSOE are going to propose, and if they are going to do it. Therefore, when that bridge is reached, we will see if it is crossed or no, and how do we cross it", he remarked.

In his opinion, they cannot pronounce themselves if they "talk about embezzlement in general and the criminal type in the abstract", without knowing specifically what the proposal is. He also believes that in Catalonia this crime was "forced" to convict pro-independence leaders who could not be prosecuted for sedition "so that no one would go unpunished and it would be a good lesson, because that is how it was read from Madrid." BANKING AND ENERGY TAX

The spokesman for the Basque Group explained the abstention of the PNV deputies in the vote on the temporary taxes on banking and energy, to recall that, from the outset, they have said that extraordinary profits should be taxed and not the volume of business, because it was "what was mandated by Europe".

As he has pointed out, this would have led to "out a tax and it could be arranged and collected by the Basque institutions". "What is happening? That, as has been proposed by the Spanish Government and, despite the fact that some amendments have been admitted to us, the very concept itself is a provision. Therefore, yes, we are going to agree , after the negotiation, in a mixed commission, what is the amount that would be more or less what we would have collected, but we will not be able to collect it from our institutions, nor will we be able to manage it," he clarified.

Along these lines, he has indicated that "the money will be collected by the Spanish Government" and "that equivalent" will be transferred to the Basque Country. "This, if it is sustained over time, we are not going to go through there. It will have to be turned into a tax," she claimed.

For this reason, technically the regional treasuries will not collect it, a commitment that EH Bildu claimed to have wrested from the central government. In any case, the jeltzales have congratulated themselves on having been able to avoid, because it was their "minimum line, that this money did not go to Madrid and that it corresponded to the Basque citizens what Kutxabank, Iberdrola or all the energy companies that may have in Euskadi".

Aitor Esteban believes that "the same could have been achieved in another way", such as with "a specific modification in the inheritance or corporation tax". "Other formulas could have been sought because our fear is also that, if it does not graduate in a balanced manner, it could harm investments, and many other companies depend on that volume of investments from those large ones, and there are many companies there Basques involved", he added. Therefore, he has clarified that they proposed "incentives for greater investment."

Regarding the tragedy on the Melilla fence, he recalled that this Friday the images will be viewed in Congress and next Wednesday the Minister of the Interior, Fernando Grande-Marlaska, will appear. After considering that the events "necessarily" occurred in Spanish territory, he clarified that "the important thing" is to determine whether the Security Forces were "aware of what was happening and whether or not they could do something to prevent that from happening."

For Esteban, it is necessary to know exactly what the circumstances surrounding the tragedy were, to purify responsibility, that "it does not only have to reach the political leaders", above all "so that it does not happen again and so that, if something correct, be done."

Aitor Esteban has referred to the climate that exists in the Congress of Deputies and has lamented that, since Vox entered Parliament, this is "terrible". After admitting that "they hit a small downturn" when the Macarena Olona controversy, he has said that now "they have returned to their rights again." For this reason, he believes that the attitude of the Santiago Abascal formation "is not acceptable and is absolutely unpresentable."

Along these lines, he has asked for "respect" and a "minimum decorum", which do not currently exist. "Everything is provocation, insult, and the show that is given is to cry" ", she has censored.

In his opinion, it does not seem that this situation will improve in the remainder of the legislature, with the elections "just around the corner." For this reason, he has insisted that the presidency of Congress must "exercise the functions that correspond to it in accordance with the regulations", and redirect the debates so that the issues for which the deputies have been summoned are dealt with.

Aitor Esteban has criticized that, many times, the Lower House becomes a "meeting room" and, on other occasions, "a kind of open gallery, a kind of 'speakers corner', in which the provocateurs go up there to provoke and insult".

In this way, he believes that "everything is muddy", which is why he considers that one should not be "so permissive". "Then someone says something about the monarchy or about the judges, and they don't hesitate to put the dots on the i's," he said.

Nor does he agree with the decision that "indecorous" words that are uttered in the chamber be withdrawn from the session journal, but that, in his opinion, they should be recorded in it.

‹ ›
Keywords:
PNVCongreso De Los Diputados
Your comment has been forwarded to the administrator for approval.×
Warning! Will constitute a criminal offense, illegal, threatening, offensive, insulting and swearing, derogatory, defamatory, vulgar, pornographic, indecent, personality rights, damaging or similar nature in the nature of all kinds of financial content, legal, criminal and administrative responsibility for the content of the sender member / members are belong.
Related News