He affirms that he does not plan to meet with large distributors in the coming days, despite holding regular meetings. 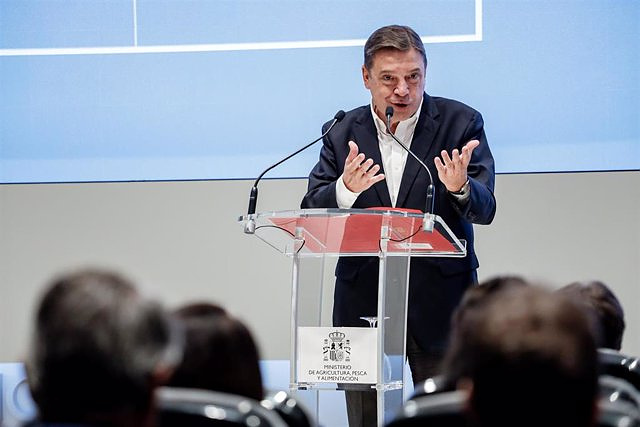 He affirms that he does not plan to meet with large distributors in the coming days, despite holding regular meetings

The Minister of Agriculture, Fisheries and Food, Luis Planas, has assured that the food supply is guaranteed in Spain and in the European Union, despite the uncertainty derived from the war in Ukraine, which has caused an "extraordinary" economic situation and that a cost pressure that is "real".

"The operation of the sector is very complicated and the first to say it is the minister, because we are effectively subjected to an economic situation that is extraordinary and to cost pressure that is real, but at the same time the supply will be assured. There is no immediate danger in any product, neither in Spain nor in the European Union, of lack of supply and I want to say it very clearly", he stressed at a press conference after meeting with agricultural organisations.

The head of Agriculture has recognized that the moment is "complicated, difficult and with a lot of uncertainty" derived from the war in Ukraine, which has translated into "very important" market volatility, with an impact on the evolution of prices of the raw materials.

"The output of grain from Ukraine is a fundamental element, not to forget what refers to the production of fertilizers, which at the moment are at a price two or three times higher than what they were a year ago. This undoubtedly poses a problem of price, but also of supply", he pointed out.

Likewise, Planas has underlined that the law of the food chain has had a "very positive" effect, which, as he has indicated, "obviously does not mean that its full potential has been, in any way, achieved", taking into account that its entry into force is from last December.

"We still have a lot to do from the point of view of work in the food chain, from the point of view of transparency," said Planas, who added that compliance with said rule allows, unlike previous crises, that All the weight does not fall on farmers and ranchers, which means achieving a balance between work in the fields, industry and distribution, so that price formation "is more balanced and not a from the end of the distribution downwards".

"There is still work to be done and we are going to continue", highlighted the Minister of Agriculture, Fisheries and Food, who, when asked about a possible meeting with large retailers following the proposal by the Minister of Labour, Yolanda Díaz, to cap the prices of basic foodstuffs, has assured that he does not plan to meet with large retailers in the coming days, despite holding regular meetings.

"We maintain practically daily contact, I do not have any specific meeting planned with the distribution sector in the coming days and obviously no measures in this regard," he said.

Likewise, Planas has pointed out that "what is reasonable" is that farmers and ranchers have "stable" prices that "ensure dignity and profitability", while stressing that the food chain law, agricultural insurance, the CAP and the measures adopted by the Government add up to an amount estimated to be much higher than 1,000 million euros.

"They are a necessary instrument to ensure that the profitability of the sector is maintained in a context in which it is absolutely necessary", the minister pointed out.

‹ ›
Keywords:
UcraniaAgriculturaPescaAlimentacionEPAgro
Your comment has been forwarded to the administrator for approval.×
Warning! Will constitute a criminal offense, illegal, threatening, offensive, insulting and swearing, derogatory, defamatory, vulgar, pornographic, indecent, personality rights, damaging or similar nature in the nature of all kinds of financial content, legal, criminal and administrative responsibility for the content of the sender member / members are belong.
Related News