Planas rules out a tax on super and hypermarkets, but asks them for responsibility to contain prices

He says that setting a minimum price on food is not legally possible, nor is it "desirable". 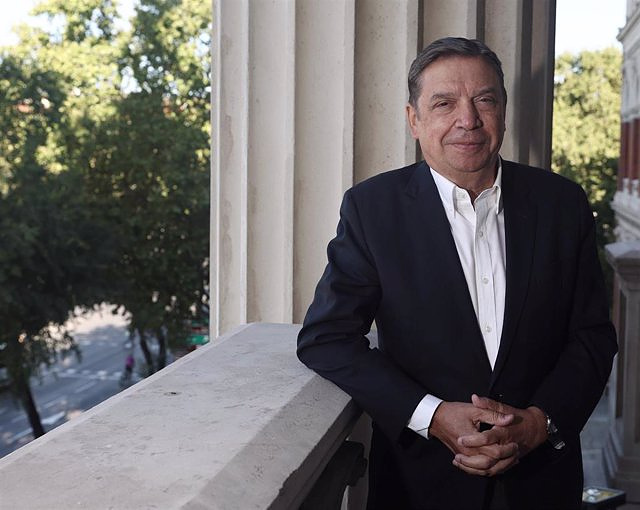 He says that setting a minimum price on food is not legally possible, nor is it "desirable"

The Minister of Agriculture, Fisheries and Food, Luis Planas, has ruled out imposing a tax on the distribution sector, but has asked for responsibility so that the rise in prices is "as limited as possible", while at the same time considering that setting a minimum price on essential goods and food products is not legally possible, nor is it "desirable".

Regarding the possibility of a tax on distribution, as claimed by his government partner United We Can, Planas has stated that the taxes applied to the financial and energy sector "are full of logic", although this is not the case with distribution .

"I don't think that is the case, at the moment, with distribution, at least until now, I want to say that all the elements of the chain, including distribution, have behaved correctly. I hope it will do so in the immediate future as well." ", the Minister of Agriculture pointed out in an interview with Europa Press.

In his opinion, all economic operators have to make an effort to contain prices and try to limit the impact of external factors such as the rise in raw materials and energy costs, because "this is good for society as a whole".

"We have to make an effort to contain prices and also for the proper functioning of distribution from the food point of view," stressed Planas, who considers, however, that inflation will moderate in the coming months.

Asked about the initiative of some distribution chains, such as Carrefour in France, to fix the prices of basic items for a hundred days, Planas has indicated that it is a "free" question that each chain must adopt, and has once again carried out a call to responsibility and restraint.

Regarding the pull of the private label and its rise in prices, Planas has recalled that the Food Chain Law specifically establishes that the business margins that apply to own brands must be the same as those brands of the industry that are sold within the agri-food distribution.

"We are facing a context in which we have to make an effort to contain prices and also for the proper functioning of distribution from the food point of view," he insisted.

Regarding the possibility of establishing minimum prices for essential goods and food products, the head of Agriculture has pointed out that from a legal point of view it is not possible and "nor is it desirable".

"I believe that the best result is the one in which a contractual result is achieved in the transactions," said Planas, who underlined that the Food Chain Law already states that food contracts cannot be made below the cost of production.

Regarding the United We Can proposal to intervene in food prices if speculation with the CPI is detected, the Minister of Agriculture has indicated that price intervention is an "exceptional measure" that can only be adopted, in accordance with European regulations, in the case of regulated markets and the agri-food market it is not.

"It does not seem to me, at all, a pertinent measure and it would not help, without a doubt, neither the producers nor the consumers, nor any link in the chain", he assured.

On the other hand, Planas has recognized that the current context is one of "concern" and "many unknowns on the horizon", for which it is the obligation of a Government "to provide certainty and security to operators to provide food and beverages to citizens".

In this sense, he has underlined that both in the worst moments of Covid-19, in Filomena or at Easter, with the transport strike, it has been possible to have sufficient food and beverage distribution on all the lines.

"I think this is an element that must be recognized and there is absolutely no shortage, obviously of food, for our citizens. You cannot try to create a situation of anxiety or panic, it seems to me that this is absolutely harmful in a context like the current one", he pointed out.

Lastly, regarding the warnings from some agrarian organizations of new demonstrations and gatherings to protest the losses in the sector, Planas advocated dialogue and a "constructive attitude" and stressed that the Government is doing "everything in its hand" and that the support "has been really very spectacular" and "the largest that is practically remembered in this century for the sector as a whole".

"We are willing, as always, to examine, discuss and seek solutions to the problems that exist. This is a volatile moment, of uncertainty and concern, but I believe that with realism we must be able to adopt solutions to each one of them. the problems we have at any given moment", he pointed out.

‹ ›
Keywords:
AgriculturaPescaEPAgroLuis Planas
Your comment has been forwarded to the administrator for approval.×
Warning! Will constitute a criminal offense, illegal, threatening, offensive, insulting and swearing, derogatory, defamatory, vulgar, pornographic, indecent, personality rights, damaging or similar nature in the nature of all kinds of financial content, legal, criminal and administrative responsibility for the content of the sender member / members are belong.
Related News