Reiterates that the "powerful" package of fiscal and social measures approved in March is currently "in force". 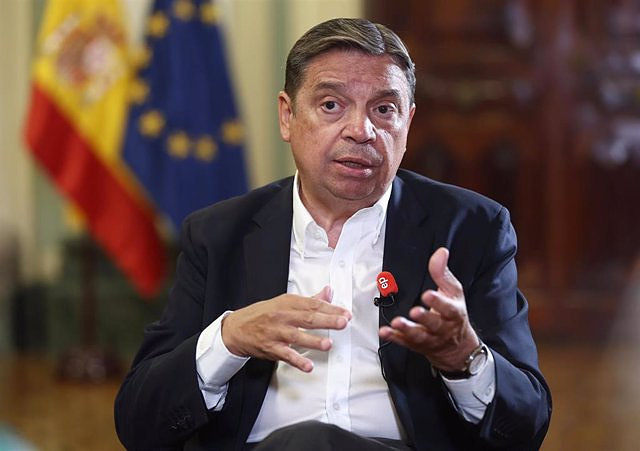 The Minister of Agriculture, Fisheries and Food, Luis Planas, has advocated "dialogue" at the meeting that will take place this Monday of the monitoring group of the drought table, which has been demanded by different autonomous communities, agricultural associations and of irrigators, who demand measures to address the current situation that the territory suffers.

"In the meeting, the current situation of the drought will be evaluated and shared with all the actors involved. We are a Government of dialogue and in this dialogue we intend to listen to what the autonomous communities, the agrarian organizations, as well as the irrigation communities think ", Planas advanced in an interview with Europa Press.

At the meeting of the technical working group, the minister has indicated that "if there are any", the initiatives that may arise in it and that "complement what is already in force" will also be examined. "Honestly, I want to reiterate that the package of measures approved in March is a very powerful response package," he stressed.

A meeting where information is expected to be exchanged on the measures put in place in March, such as the postponement of Social Security contributions, the reduction of the minimum number of real days contributed to access the unemployment subsidy or agricultural income in favor of casual agricultural workers residing in Andalusia and Extremadura.

In addition, the evolution of the liquidity measures will also be presented through the ICO-MAPA-SAECA line, which was extended to just over 24 million euros, or the increase of 60 million euros in the allocation of agricultural insurance.

In this way, Planas has recalled that it was he who convened the Drought Roundtable on his own initiative on March 4. "At that time, no autonomous community or agricultural organization requested it. It was a personal vision of mine as minister after consulting my team and after seeing that we could face a period of low rainfall and drought in Spain," he explained.

"I took to the Council of Ministers a decree law with a very powerful package of response measures to this situation that is currently still in force with tax credits and social, liquidity and investment measures," he recalled.

The minister specified that this aid includes a package in terms of actions, above all referring to the Guadalquivir and Guadiana basins, "the most affected by the drought at that time".

"That package is fully in force, what has happened since then? It has happened, first of all, that the weeks that followed the decree law and some political leader told me, 'but let's see if you have made a decree law and now it rains , what's the point?' Well, it made sense then and it makes sense now," he asserted.

The head of Agriculture has assured that Spain and the world is facing a scenario of climate change whose duration is unknown, but "against which we must react". "First we must fulfill the commitments of the Paris agreement, that is, try to prevent the average temperature from rising, and second, try our best to respond to situations that may arise with response packages as we have already done", he indicated. .

In this way, Planas has advocated "getting the most out of every drop of water", making irrigation "increasingly efficient". Thus, the Government plans to invest around 2,130 million euros from this year to 2027 to improve irrigation.

The minister also highlighted the importance of agricultural insurance, which he considers to be a "very effective" instrument for responding to situations of drought and forest fires that Spain is suffering, for which they have reinforced it with an extraordinary provision of 60 millions of euros.

‹ ›
Keywords:
Ministerio De AgriculturaSequíaAgriculturaPescaEPAgroLuis Planas
Your comment has been forwarded to the administrator for approval.×
Warning! Will constitute a criminal offense, illegal, threatening, offensive, insulting and swearing, derogatory, defamatory, vulgar, pornographic, indecent, personality rights, damaging or similar nature in the nature of all kinds of financial content, legal, criminal and administrative responsibility for the content of the sender member / members are belong.
Related News