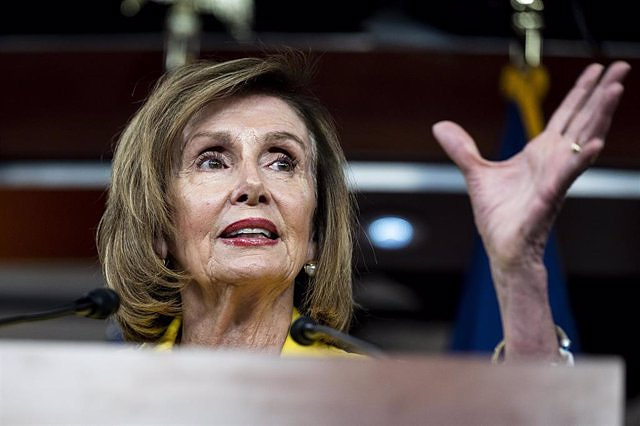 The president of the House of Representatives of the United States, Nancy Pelosi, has published this Sunday the itinerary of the tour of Asia that has just begun without mentioning Taiwan among the scales of the same, amid the tension before the threats of China about a possible visit by the senior American official to a territory over which Beijing historically claims its sovereignty and denounces every approach by the United States as interference.

Pelosi mentions that the tour will take her through "Singapore, Malaysia, South Korea and Japan," where she and her accompanying delegation "will hold high-level meetings to discuss how we can promote shared interests and values, including peace." and security, economic growth and trade, the COVID-19 pandemic, the climate crisis, Human Rights and democratic governance."

Tension with China has reached such a point that its Army began a live-fire military drill this past Saturday in Fujian province, just off the coast of the Taiwan Strait, very close to the territory.

Relations between Beijing and Taipei were suspended in 1949, after the forces of the Chinese nationalist Kuomintang party, led by Chiang Kai Shek, suffered a defeat in the civil war against the Communist Party of China and moved to the island of Taiwan.

Links between Taiwan and mainland China were only re-established on a business and informal level in the late 1980s. China regards Taiwan as its rogue province, even though the island has declared independence and is supported by the United States. and the European Union.

In this context, Pelosi's possible visit has a historic scope because she would be the first president of the lower house of the US Congress to visit Taiwan since Republican Newt Gingrich in 1997, in an announcement to which China publicly warned that it would respond in a public way. "forceful and energetic".

‹ ›
Keywords:
Estados UnidosChinaAsia
Your comment has been forwarded to the administrator for approval.×
Warning! Will constitute a criminal offense, illegal, threatening, offensive, insulting and swearing, derogatory, defamatory, vulgar, pornographic, indecent, personality rights, damaging or similar nature in the nature of all kinds of financial content, legal, criminal and administrative responsibility for the content of the sender member / members are belong.
Related News