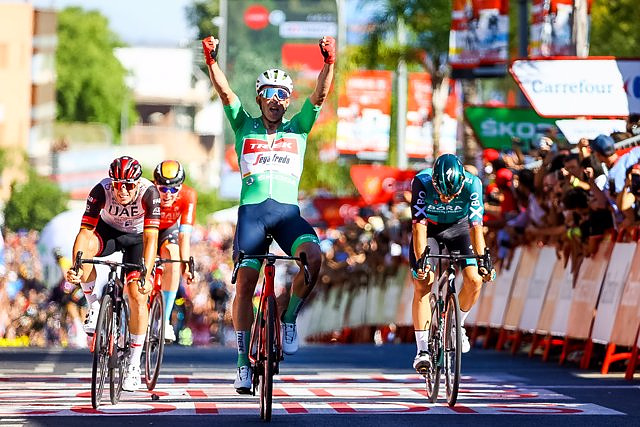 The Danish cyclist Mads Pedersen (Trek Segafredo) won this Tuesday the sprint on day 16 of La Vuelta 2022, disputed between Sanlúcar de Barrameda and Tomares over 189.4 kilometers, in an agonizing finish between the men in the general classification.

Leader Remco Evenepoel (Quick-Step Alpha Vinyl) suffered mechanical problems and was left standing waiting for his team car, while Slovenian Primoz Roglic (Jumbo-Visma) fell to the ground with 75 meters to go when he was contesting the victory of stage.

Pedersen, who already has his second partial victory in this edition, took a coveted victory in Tomares that revived the tension in the general classification. The misfortunes came as a result of the attack of the three-time champion of the Spanish round Roglic, who jumped in search of victory pursued by the red jersey Evenepoel, but to the surprise of the Belgian he was cut off with a breakdown.

When everything seemed to be on track for the leader of the Jumbo-Visma, on the wheel with Pedersen, Pascal Ackermann (UAE Team Emirates), Danny van Poppel (Bora-hansgrohe) and Fred Wright (Bahrain Victorious), Roglic was injured after falling.

The time difference due to the final circumstances left the Slovenian as the new temporary leader of La Vuelta, but the round's jury understood that Evenepoel punctured within the safety zone -in the last three kilometers-, so he maintains his leadership with 1 minute and 26 seconds ahead. Thus, he keeps the jersey for the eleventh consecutive day and equals the record of his current rival after achieving it in 2019.

After the second day of rest on Monday, this stage definitely served to put the legs in tune for what is to come; the final assault on La Vuelta that already experienced tension in its first stage of the third week.

The breakaway of the day was led by Spaniards Ander Okamika (Burgos-BH) and Luis Ángel Maté (Euskaltel-Euskadi), who quickly jumped out of the pack to lead the stage for 175 kilometres, although they finally gave up in the last 13. However, for Maté was also an achievement, as he will donate a tree to plant in Sierra Bermeja for every kilometer he leads the race.

There were no changes in the general classification beyond the abandonment of Maxim van Gils (Lotto Soudal), after having reported his positive for Covid during the rest day, nor did Esteban Chaves (EF Education-EasyPost).

This Wednesday begins the final stretch of La Vuelta, in a more demanding day with 192 kilometers between Trujillo and Alto del Piornal, which will climb three different slopes where the favorite teams will present their strategies to shake up the general.