On the anti-abortion measures in CyL: "There is no Government, no State, no god that can decide on the body and life of women". 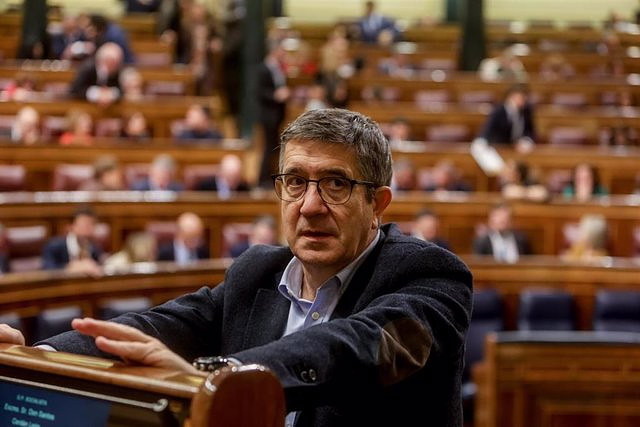 On the anti-abortion measures in CyL: "There is no Government, no State, no god that can decide on the body and life of women"

The PSOE spokesman in Congress, Patxi López, has accused the Popular Party and Vox of making "hate speeches" against the Prime Minister, Pedro Sánchez, at the same time that he has questioned their constitutionalism and has accused both formations of having " little moral and political character".

"Those speeches today are the best democratic pedagogy for this country? Is that your moderation? Are those who were there with the little eagle flag the constitutionalists of Spain?" López pointed out in explicit reference to the demonstration last Saturday called by more than a hundred associations in protest against the "political drift" of Pedro Sánchez, which was attended by the leader of Vox, Santiago Abascal, and members of PP and Ciudadanos.

During his intervention in the plenary session of the Congress of Deputies this Tuesday, the socialist spokesman regretted that the PP confuses and believes that the "political adversary" is its "enemy". "That only demonstrates their lack of moral and political attitude, because they become the biggest feeders of populism," he pointed out.

At this point, he recalled that "less than a month ago" the right-wing parties "flooded social networks" with photos of the Government pointing out to them as "number one public enemies to condition" their votes. "They have pointed at us with worse things and there will be no finger, no sign, no banner, or graffiti that will make us change our convictions," he added.

As for the controversy aroused and the "denials" by the PP on the anti-abortion measures announced by the vice president of the Junta de Castilla y León, Juan García-Gallardo, López has lamented the "brutal setback" that it means for women and He has accused them of "stigmatizing" them.

"It's scary", said the socialist, who, with a high tone of voice, has ruled that "there is no Government, no State, no god, who can decide on the body and life of women. Only they. Because each one is sovereign of itself."

In line, he has assured that this issue "is not a Vox thing" and has brought up the appeal that the PP filed in the Constitutional Court (TC) in 2011 to the Abortion Law. "It was you and, now with Vox, you are the ones who have opposed all the advances. That does sound more like (Viktor) Orbán to me. That is pure Orbán," he added, addressing the 'popular' bench.

‹ ›
Keywords:
Pedro SánchezPSOEPPPatxi LópezVOX
Your comment has been forwarded to the administrator for approval.×
Warning! Will constitute a criminal offense, illegal, threatening, offensive, insulting and swearing, derogatory, defamatory, vulgar, pornographic, indecent, personality rights, damaging or similar nature in the nature of all kinds of financial content, legal, criminal and administrative responsibility for the content of the sender member / members are belong.
Related News