It warns that the independence processes are not stopped by the Penal Code" and asks to do the debate on embezzlement well. 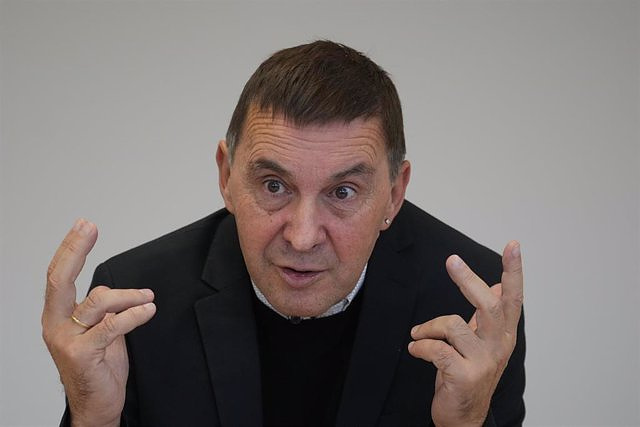 The general coordinator of EH Bildu, Arnaldo Otegi, has defended the budget agreement reached by his formation with the Executive of Pedro Sánchez, which "benefits the popular classes", and has affirmed that "there is a great paradox" that there would not be "Government of progress in the State" without the support of the leftist forces that want to "leave" Spain. In addition, he has warned that "independence processes are not stopped by the Penal Code." "It will stop once, but it won't stop forever," he said.

In an interview with Europa Press, Otegi has rejected that there has been a change of 'Budgets for prisoners' and has indicated that the agreement on the accounts is "explained" with "light and stenographers". He has also highlighted the incorporation of the transfer of Traffic in Navarra to the Foral Police, until now in the hands of the Civil Guard.

In response to the reproaches of PP, Cs and Vox to the Executive for "giving in to blackmail" by EH Bildu when considering that he wants to "expel" the Civil Guard, he has said that the transfer of this competence supposes "compliance with the Law". "They try to find a strategy of big headlines, that stresses people, that pursues an emotional climate, and makes them think with their guts and not with their heads," he stressed.

The leader of the pro-sovereignty party trusts that "someday" it will be possible "to negotiate a minimum program to jointly defend the interests of the Basque-Navarrese citizens in Congress" by the deputies of EH Bildu, PNV, PSE-EE, PSN and Podemos, but "sufficient political maturity" still does not exist.

After rejecting that they compete with the PNV in Madrid to achieve achievements for the Basques, he has stated that, while EH Bildu "has no objection to recognizing" when the jeltzales "get something beneficial for the country", they react "with a certain jealousy" when it's the other way around.

Regarding the accusations that the sovereignist formation reaches agreements on claims or compromised pacts with the PNV, he has assured that "everyone knows that before Fleming discovered penicillin" the jeltzale formation "already had the formula". "It seems to us an absurd debate," he added.

Arnaldo Otegi has said that only the PNV votes "do not add up to a majority." "The government has sustained itself for three years in what we call the 'plurinational left bloc', fundamentally EH Bildu, ERC, Podemos and the PSOE, with the help of the PNV and sometimes the BNG", he stated.

Along these lines, he stressed that the situation has changed because "there is a great paradox that there is no Government of progress in the Spanish State, if those of us who want to leave the Spanish State and are also on the left, we do not support it". "Without left-wing independent Basques and Catalans, there is no PSOE-Podemos Government in the State and that offers us the possibility of negotiating things," he remarked.

Regarding the statements by the president of the PP, Alberto Núñez Feijóo, assuring that Pedro Sánchez has managed to carry out his Budgets in exchange for the ETA prisoners, he has affirmed that EH Bildu has made explicit the agreements that he has reached and there are "lights and stenographers". "It gives me the impression that Mr. Núñez Feijóo is still installed in a framework of political debate that only interests the extreme right," he indicated.

Otegi has pointed out that the agreement "can be seen, it will be made explicit in the PGE", and therefore, "the non-contributory pensions will rise to 15%, even for the people of the PP".

The leader of the abertzale formation considers that the popular ones will try to "throw the rest" in the municipal elections because they believe that they will be "like the first part of a party that is going to be played later in the general elections." "The framework that they have installed in political and discourse terms is hyperbole, based on the fact that 'there is a social communist government in the State, a permanent betrayal of Spain, we do not know exactly what it is, and there is a puppet government mortgaged by hidden forces,'" he said.

What actually exists, as he has added, is a government of a coalition of progress "for the first time" after the Second Republic, "and there is a plurinational left bloc in the State that has facilitated" that Executive, which although it does not what they would like, because they "seem absolutely insufficient, at least try to do things differently".

As he has emphasized, the approach of the ETA prisoners is "compliance with the Law", something that they have always claimed from the Government because the dispersal was "an illegality". However, he believes that it is "insufficient" because, "with the Law in hand", the majority of the inmates "would be in the third grade".

Arnaldo Otegi has insisted on his willingness to take "every step" in favor of coexistence, which cannot be "a framework for political dispute." "We have recognized the damage caused, our responsibility for the suffering, we made the declaration on October 18, and we do not observe much interest on the other parties in building coexistence, but rather in maintaining a story," he indicated.

The leader of EH Bildu has indicated that, on the contrary, they find the statements of former Interior Minister José Barrionuevo "boasting" about the GAL's terrorism, and has assured that it would be "a great contribution to coexistence" if the State recognized that "has used the dirty war". SEDITION

Arnaldo Otegi has referred to the elimination of the crime of sedition, to ensure that it was an "anachronistic" criminal type. In addition, he has said that it is necessary to "understand that the independence processes cannot be stopped if the majority democratic wills of certain nations of the State want to vote and decide their future freely and democratically."

"Does anyone think that this stops with the Penal Code? It will stop once, but it will not stop forever," he warned. Along these lines, he has stated that "you cannot put doors to the countryside" and the alternative to the independence processes "is not to put people in jail, not let them vote or hit people."

Regarding the possibility of modifying the crime of embezzlement, he considers that it is "a debate delicate enough to be done well."

The leader of EH Bildu has affirmed that in Euskadi they have not reached a budgetary agreement with the Basque Government because it "did not want to", since it has an absolute majority and insists on applying "old recipes to new problems", without addressing structural measures .

Faced with the reproaches that they support the state and Navarrese accounts, but not those of the Basque Autonomous Community, Otegi has pointed out that there is "a much more fluid communication" with the Governments of Madrid and the Foral Community. "And someone will be responsible for this," he assured, to point out that, in the specific case of Navarra, they have a "practically daily" relationship with the Executive and its president, María Chivite.

‹ ›
Keywords:
BilduPresupuestos GeneralesPedro SánchezPSOEArnaldo Otegi
Your comment has been forwarded to the administrator for approval.×
Warning! Will constitute a criminal offense, illegal, threatening, offensive, insulting and swearing, derogatory, defamatory, vulgar, pornographic, indecent, personality rights, damaging or similar nature in the nature of all kinds of financial content, legal, criminal and administrative responsibility for the content of the sender member / members are belong.
Related News