Osasuna looks for its first victory away from home in Almería 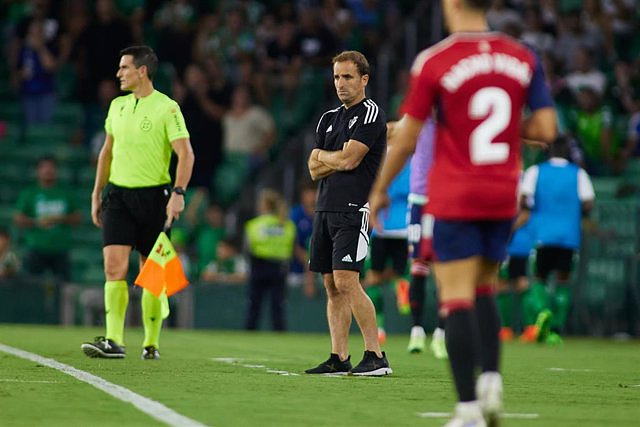 Osasuna aspires to finish the fifth day of LaLiga Santander in European positions this Monday at the Power Horse Stadium (9:00 p.m.), where they will seek their first away victory of the course against an Almería team that has achieved its only victory in the heat of its public.

Jagoba Arrasate's men, who started the weekend sixth with nine points, have beaten Sevilla (2-1), Cádiz (2-0) and Rayo Vallecano (2-1) at El Sadar, but succumbed on their only visit of the season, in Seville against Real Betis (1-0).

Now, they will travel to Almería to try to take the three points in a duel in which the Navarrese will not be able to count on the injured Kike Saverio and for which they have doubts about the injured Rubén Peña, Aimar Oroz, Iker Benito and Lucas Torró.

Meanwhile, the team from Almería (4) will try to forget the defeat in Pucela (1-0), which broke a series of two games scoring points against Elche (1-1) and Sevilla (2-1) and sign the first win against the rojillos after four league games falling to them.

Without Gonzalo Melero, Iván Martos and Juanjo Nieto, Rubi will keep an eye on the status of Iñigo Eguaras, César de la Hoz, Rodrigo Ely and Álex Centelles, doubts for the clash.

‹ ›
Keywords:
Osasuna
Your comment has been forwarded to the administrator for approval.×
Warning! Will constitute a criminal offense, illegal, threatening, offensive, insulting and swearing, derogatory, defamatory, vulgar, pornographic, indecent, personality rights, damaging or similar nature in the nature of all kinds of financial content, legal, criminal and administrative responsibility for the content of the sender member / members are belong.
Related News