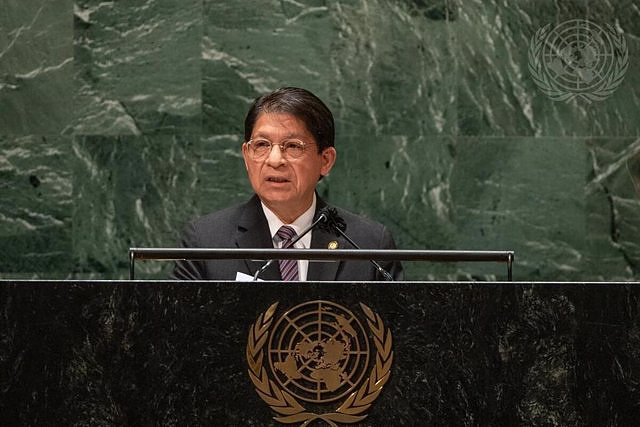 The Government of Nicaragua has assured this Saturday that the war in Ukraine will end as "a new Western defeat", and has accused NATO of directing the Ukrainian Army "from the rear" and of being a "belligerent organization".

"Despite the efforts to defeat Russia on the ground, the military outlook heralds a new Western defeat," said Nicaraguan Foreign Minister Denis Moncada during a seminar on "Militarization, NATO and the Struggle for Peace" .

Moncada has detailed that the war in Ukraine has once again put the Atlantic Alliance in the international spotlight, since it would have become a "belligerent organization" after supplying arms and military and paramilitary training to the Ukrainian Army.

Likewise, the head of Nicaraguan diplomacy recalled "the bitter defeat suffered" in Syria and Afghanistan by Western countries, which are added "to the failed victories in Iraq and the flight from Somalia."

"In effect, the military setbacks suffered in the Middle East and Asia Minor have prepared the ground for a serious reconsideration of the Atlantic Alliance, the partial redefinition of its role and its perspectives," Moncada said, according to a statement from the Ministry of Outside of Nicaragua.

He has also stressed that NATO's expansion to the East, the "provocative role it assumes against emerging countries" and the "open challenge to Russia and China" represent "a partial genetic modification" of the role of the Atlantic Alliance in the world.

"The absolute dominance of the United States over the alliance was further accentuated by the war in Ukraine (...). Today, NATO can be described as an extension of the American military force and not as an international coalition, having restricted severely attention to the general interests of its members in favor of the dominance of US interests," he added.

‹ ›
Keywords:
NicaraguaUcraniaOTAN
Your comment has been forwarded to the administrator for approval.×
Warning! Will constitute a criminal offense, illegal, threatening, offensive, insulting and swearing, derogatory, defamatory, vulgar, pornographic, indecent, personality rights, damaging or similar nature in the nature of all kinds of financial content, legal, criminal and administrative responsibility for the content of the sender member / members are belong.
Related News