Natalia Arroyo: "If we get closer to our best version, the game with Bayern will go well" 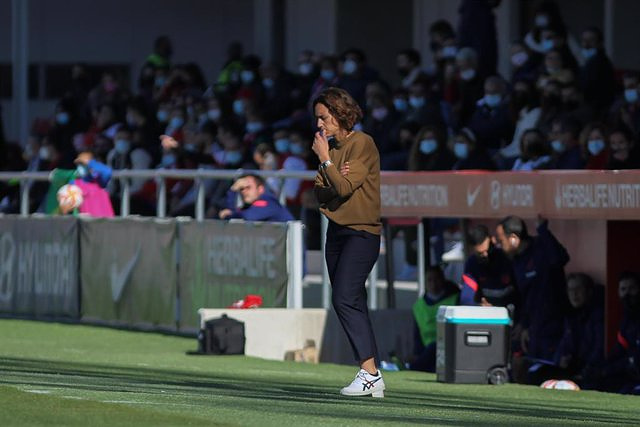 The coach of Real Sociedad, Natalia Arroyo, gave the role of "favorites" to Bayern Munich, which they will receive this Tuesday in the first leg of the 'playoff' for access to the group stage of the Women's Champions League, but it was shown sure that if they are able to get closer to their "best version" the game "will go well".

"It's easy, they are the favorites, who are the ones who have been around the quarterfinals and semifinals in recent years, but there is a difference in being one and then having to go through," Natalia Arroyo said at a press conference on Monday.

The realistic coach has made her team "know" that they have "strengths that are going to make Bayern uncomfortable." "We have options, whether there are many or few, we will see throughout the game. They are a super team with many weapons, but we also have them. I sincerely believe that we have them and I hope that the people who come to the Reale Arena believe on that and help us," he wished.

"It's always difficult to get the best version out because our rivals also play, but if we're close to it it's going to work out. We have many different ways of taking danger, looking like that team that was second last year is going to give us options this tie," added Arroyo.

The Real Sociedad coach described it as a "very complete team". "Saving distances, we want similar things. They take care of possession, starting the game in a controlled manner, dynamism and play very well in space," she explained.

"We are going to see who is stronger and who imposes more when it comes to them. We can hurt them in many ways, but focusing on one weapon can only lead us astray and I hope we find the ability to interpret what moment each game is at and get our best version", continued the Catalan.

Arroyo warned that his team will "always" try to "start games strong" and that they will not change despite the entity of the rival. "Our face changes a bit when we get the first action to be ours. In general, we usually go into games well and we have to try not to take more risks than we can and go in with conviction because it will give us wings. We have the feeling that we are going to have answers to their proposals", he pointed out.

Finally, the Spanish coach knows that this clash will serve to "see if it is being enough" the growth that her team is experiencing. "We have had this game on the calendar for a long time and I see the team doing well, with that spark that something big is coming, but also with conviction. On an emotional level it will also be complicated for Bayern," she said.

‹ ›
Keywords:
Champions LeagueReal SociedadMujer Y Deporte
Your comment has been forwarded to the administrator for approval.×
Warning! Will constitute a criminal offense, illegal, threatening, offensive, insulting and swearing, derogatory, defamatory, vulgar, pornographic, indecent, personality rights, damaging or similar nature in the nature of all kinds of financial content, legal, criminal and administrative responsibility for the content of the sender member / members are belong.
Related News