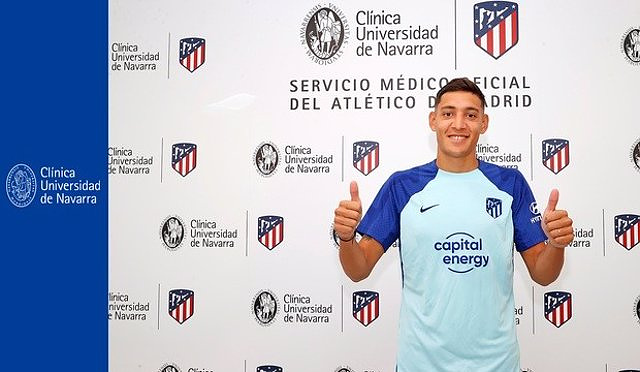 The Argentine right-back Nahuel Molina is a new Atlético de Madrid player, for whom he signs for the next five seasons, until 2027, after the rojiblanco club reached a transfer agreement with the Italian Udinese.

Nahuel Molina, 24, has played the last two seasons for Udinese in Serie A, where he has played 68 games, scoring 10 goals and dishing out seven assists. The international is an offensive side and right winger who can act on both wings and has arrived to alleviate the problems on that side for Diego Pablo Simeone since the departure of Englishman Kieran Trippier.

Molina left the Boca Juniors youth academy and from there he went first to Defense and Justice and then to Rosario Central before making the leap to Europe at the hands of Udinese. He is an absolute international with the Argentine national team, with whom he won the Copa América in 2021.

The rojublanco club announced his arrival this Thursday, despite the fact that the player landed in Madrid last Monday to undergo a medical examination and was already with his teammates in the friendly that the team played on Wednesday against Numancia.

"After passing a medical examination at the University Clinic of Navarra, a player with experience in Europe, capable of playing on both sides, arrives at Atlético de Madrid. He is a serious defensive player who joins the attack very well," the entity pointed out.

In addition, the mattress club underlined Molina that he is "a great assistant for his teammates" and that he has a "good hit from set pieces, another of the qualities that make him a very complete player."

‹ ›
Keywords:
ArgentinaItaliaAtlético De Madrid
Your comment has been forwarded to the administrator for approval.×
Warning! Will constitute a criminal offense, illegal, threatening, offensive, insulting and swearing, derogatory, defamatory, vulgar, pornographic, indecent, personality rights, damaging or similar nature in the nature of all kinds of financial content, legal, criminal and administrative responsibility for the content of the sender member / members are belong.
Related News