Nahuel Molina: "I come to a team that will fight for all competitions" 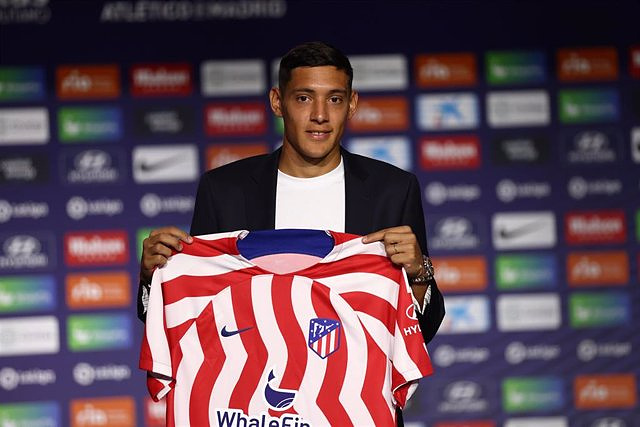 The Argentine winger Nahuel Molina, the last signing of the season for Atlético de Madrid, stated this Friday that he is coming to "a very strong team" and that "he is going to fight in all competitions", whose shirt he hopes to "defend with a lot of grit and a lot of strength."

"I come to a very strong team, very united. That gives itself, that is going to fight all the competitions and I am going to be available to my teammates and the coach to be able to contribute on my part", Molina declared during his official presentation as new Atletico Madrid player.

The defender acknowledged that he was attracted to "everything" of the Atletico team's offer. "The institution, the team, the coach, to be able to compete in LaLiga, in the Champions League. For me it is a huge illusion and I think that for the whole team it is simply saying yes and luckily it happened", he explained.

The right-back, who has already trained with his teammates, has been surprised by "the intensity with which he works" and "the desire to work and improve day by day to be ready when it's time to play ". "Obviously training is tough, but it's what leads to great things," he added.

"For me it is an honor that an institution like this and a coaching staff like 'Cholo' (Simeone) notice me. I hope to be able to defend this shirt with a lot of claw and a lot of strength," said the footballer.

However, Molina has not yet spoken with the Argentine coach about where he will usually perform, although he believes "that depends on the game and how the coaching staff prepares it." "I am a defender first, so first I want to be well positioned at the back and then, if possible, attack," he stressed.

It doesn't "change much" for the player to play as a winger in a back four or as a lane in a back five. "It's the same position, just a little higher on the pitch. I'm a winger, the important thing is to be well positioned and do what the coach asks," he stressed.

Molina defined the welcome from his teammates as "very nice" and did not want to highlight any in particular yet because "they are great players" and by "naming one" it would "look bad with the rest." "I hope to learn a lot from them. I'm really looking forward to my debut, to being able to have a few minutes. I hope to be able to wear this shirt soon and enjoy myself," he said.

The Argentine will wear the same number he wore in Udinese, and which has become vacant after Samuel Lino's loan to Valencia. "I wanted to wait because Lino had it first, but today that the number is free for me it will be a pleasure to wear the '16'", confessed the international.

"I am very happy, very happy to be able to belong to this great family, I hope it will be many years at the club and to be able to give the maximum of my effort," said Nahuel Molina at the ceremony held at the Cívitas Metropolitano.

‹ ›
Keywords:
ArgentinaAtlético De Madrid
Your comment has been forwarded to the administrator for approval.×
Warning! Will constitute a criminal offense, illegal, threatening, offensive, insulting and swearing, derogatory, defamatory, vulgar, pornographic, indecent, personality rights, damaging or similar nature in the nature of all kinds of financial content, legal, criminal and administrative responsibility for the content of the sender member / members are belong.
Related News