Nadal: "I hope to continue being a benchmark for the values ​​of Spain" 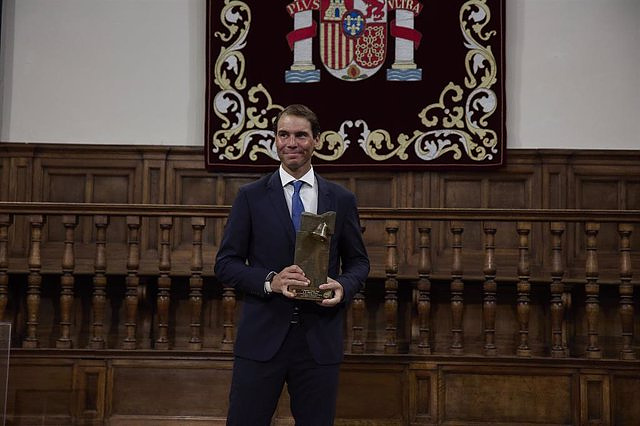 The Spanish tennis player Rafa Nadal received the 5th Camino Real Award from King Felipe VI, an award that "recognizes the professional work of Spaniards who, in an outstanding and exemplary manner, project and enhance the positive image" of the country in North America, which that makes the Balearic want to "be and continue to be a benchmark for the values ​​of Spain".

"My path is not comparable to what my ancestors did on the Camino Real, what I do surely has much less merit than the immense work of America, although with my work and behavior I show the world the values ​​that my parents taught me. instilled, which are what have marked my career. I hope to be and continue to be a benchmark for the values ​​of Spain, always remaining faithful to my Balearic and Majorcan origin", Nadal declared during his speech at the event.

Nadal received the 5th Camino Real Award in the Auditorium of the University of Alcalá de Henares, where the king headed a list of important institutional representatives and which for him represents "an honor and immense joy" due to the "strong historical connotation" that it implies the award for his work "within tennis" and his "passion for sport" that he takes "beyond" Spanish borders.

The Balearic tennis player explained that "2022 is being a different year" and joked that he hopes "that it is not implied that this is the end" of his sports career. "Not much less, or at least this was the intention. The intention is to continue carrying the name of Spain around the world and competing," he added.

"Being the year in which I have won the first two Grand Slams, signing one of the best starts of my career, it is being a very complicated year, beyond the injuries, which have been chasing me throughout my career, but also because of the personal and family news, which at this moment is very good news", declared the man from Manacor, who will be a father in 2022.

For Nadal, the year has been "full of joys and also difficult moments". "So receiving recognition like today's is a greater happiness. I would like a word of attitude for your Majesty's presence, and for the continuous support and attention, not only with me but with all the Spanish athletes whom in some way I represent today," said the tennis player, thanking Felipe VI for his work.

The Balearic Islands are proud "to follow in the footsteps of the previous winners, great figures in science, culture and sport, is something that makes me especially happy", and he took the opportunity to remember the Spanish team, champion of Eurobasket 2022 in Germany last Sunday.

"How could it be otherwise, I mention my friend Pau Gasol, who had the honor of receiving this award in 2015. By the way, I know that he is as happy or more than us after the great victory on Sunday of our selection of basketball. From here my congratulations to all of them, players, technical staff and all those who have made this historic victory possible", he assured.

Nadal explained that, although he lives "almost four months in the three countries that the Franklin Institute of the University of Alcalá looks at" during the competition, Spain is his "home". "I have always lived in Mallorca, I never wanted to move. This does not make me comparable with the previous winners, who have been lucky enough to live part of their lives on the other side of the Atlantic. Perhaps the Mediterranean, and specifically the islanders, it is more difficult for us to leave home," he acknowledged.

The tennis player wanted to "confirm on a personal level that the Spanish imprint exists" wherever he goes and that "it is rare not to meet a person who does not speak Spanish or who does not have a Hispanic origin", something that produces "a feeling of union and instant friendship". "I also know that when we compete we do it on behalf of the majority of millions of Spaniards who follow us with passion, joy and also suffering. I also dedicate this tribute and greeting to all of them", he commented.

He also remembered both the Camino Real and the University of Alcalá, returning the thanks to the award received. "Wimbledon, the oldest tennis tournament in the world, began to be played in 1877 and since 1922 in the place that is held today, on the outskirts of London. Roland Garros was played for the first time in 1891 and has been played since 1925 in the same place as today. The United States Open, in 1881 and since 1978 in Queens. And the Australian Open, which has been held since 1905 in Melbourne, a city that was founded in 1835. This University was founded in 1499 and the Camino Royal, also in the 15th century, almost four centuries before the first Wimbledon," he said.

"Since its beginnings, Spanish culture came to the current United States through the Camino Real, which refers to the routes used by the Spaniards to reach the territories that are part of that friendly country. It is important that young people and not As young as we are aware of the wonder of the history and legacy that we Spaniards have and have left for the world, in order to put the achievements we can achieve today into context", concluded Nadal.

‹ ›
Keywords:
Rafa NadalRey Felipe
Your comment has been forwarded to the administrator for approval.×
Warning! Will constitute a criminal offense, illegal, threatening, offensive, insulting and swearing, derogatory, defamatory, vulgar, pornographic, indecent, personality rights, damaging or similar nature in the nature of all kinds of financial content, legal, criminal and administrative responsibility for the content of the sender member / members are belong.
Related News