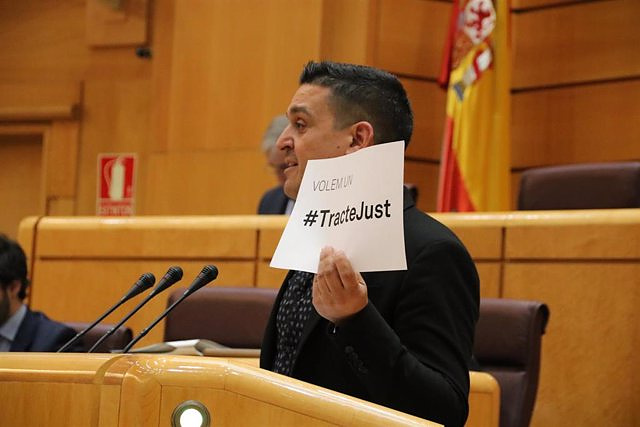 The spokesman for Compromís in the Senate, Carles Mulet, has today proposed that the Government redirect the announced commitment to raise up to 2% of GDP in military spending in the coming years to fighting fires, "a challenge that in itself himself an enemy and a war that we must face.

"The invasion of Ukraine by Russia has been a blow that has served to reinforce the warmongering discourse of the most stale part of the PSOE, led by the Defense Minister, and we are seeing how the Government's strong investment in arming Ukraine, Allocating millions of euros in arms and military aid does not serve to stop the war. Rather, it seems that it serves to go in the opposite direction and entrench the situation. But despite them, we must look for a medium-term horizon where the war cease to be a reality and where this type of investment ceases to be a priority", he stressed in a video.

For Mulet, the excuse "cannot be that the Spanish arms industry generates thousands of jobs", since "technology is urgent and it is committed to fire prevention and extinction".

In addition, remember that you not only have to work when these occur, but throughout the year, so this heavy industry "could be reconverted".

"Instead of building war planes and missiles, let planes and machinery be built to prevent and put out fires. A full-fledged reconversion of warmongering plans is urgently needed in the face of the challenge of climate change and the side effects it will generate," he stressed.

Compromís values ​​"very negatively" the intention of the PSOE in the Government to increase military spending to 2% of GDP year after year until the goal is reached in 2029.

"We are talking about devoting to this spending a figure that could reach an additional 12,000 million, so that the defense budget would have 30,000 million for the militarization of NATO member states and the purchase of weapons against threats that in many cases they are not real or a priority," added Mulet.

Mulet recalled that last month Spain bought 20 state-of-the-art Eurofighter aircraft for the army, for an amount of 2,043 million euros, with which it would have been possible to buy 77 CL-215/Bombardier 415 seaplanes, 315 Kamov fire-fighting helicopters and 358 Brigade Transport Helicopters (BRIF).

"The real enemy, the real war, we have against climate change and the devastating fires that are burning throughout the State these days. All the budgetary effort must go there and not in weapons to kill people," he added.

‹ ›
Keywords:
SenadoCompromís
Your comment has been forwarded to the administrator for approval.×
Warning! Will constitute a criminal offense, illegal, threatening, offensive, insulting and swearing, derogatory, defamatory, vulgar, pornographic, indecent, personality rights, damaging or similar nature in the nature of all kinds of financial content, legal, criminal and administrative responsibility for the content of the sender member / members are belong.
Related News