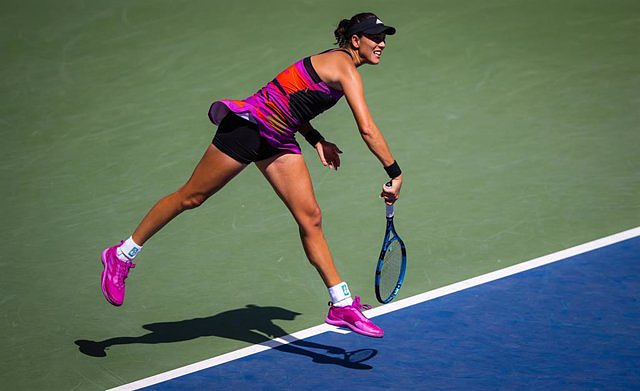 The Spanish-Venezuelan tennis player Garbiñe Muguruza surpassed with authority her debut in the Tokyo tournament, in the WTA 500 category, beating the Greek Despina Papamichail in two sets (6-4 and 6-2).

Muguruza prevailed forcefully and easily, and only with some difficulties at the beginning of the duel to recover her smile after her adventure at the US Open -the last 'Grand Slam' of the season where she fell in the third round-.

The Spanish-Venezuelan began by breaking the serve of the world number 213, but she struck back at the third seed's first serve in Tokyo. Everything continued as planned until the fifth game, when Muguruza was able to take advantage thanks to a second 'break'. She returned with 5-3 to win the first set, even with two balls to do it, but finally closed it with her serve (6-4).

In the second set, Muguruza did not speculate and was up 4-0 thanks to a blank first break against the Greek in the first game and another in the third game, without failing with her service either. The roller of the Spanish-Venezuelan continued her mission and put the final 6-2 on the first match point she had, after one hour and 26 minutes of play.

The number 12 in the world, in full ascent to the Top 10 of the ranking, will face each other in the quarterfinals against the winner of the duel between the Chinese Xinyu Wang and the Russian Liudmila Samsonova.

‹ ›
Keywords:
VenezuelaTokioGarbiñe Muguruza
Your comment has been forwarded to the administrator for approval.×
Warning! Will constitute a criminal offense, illegal, threatening, offensive, insulting and swearing, derogatory, defamatory, vulgar, pornographic, indecent, personality rights, damaging or similar nature in the nature of all kinds of financial content, legal, criminal and administrative responsibility for the content of the sender member / members are belong.
Related News