Mouriño: "Those who have made the mistake have been Denis and Mina, not Celta"

Celta's president believes that Suárez has "betrayed" them and that he was wrong not to put a clause to terminate Mina's contract. 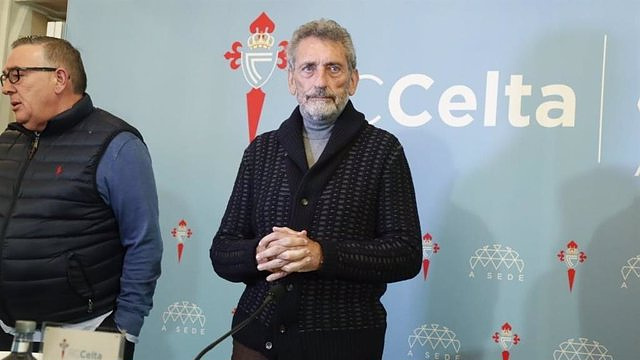 The president of RC Celta, Carlos Mouriño, was very critical this Thursday of Denis Suárez and Santi Mina, "two players who are affecting the image of the club", and about whom he is clear that "those who have made the mistake have been them" and not the club, although their situation does affect them when it comes to new signings.

"We are not going to rescind them so that they can count the amortization in the salary cap for this year, neither of them affect me to be able to sign another player. Those who have made the mistake have been them, not Celta. That is not we are going to reward", explained Mouriño at a press conference called to address both situations.

The leader acknowledged that "between Denis and Santi Mina they take 20 percent of the entire squad" in terms of the weight of their salaries. "I am not going to go into detail about how it affects the squad, but it affects us a lot, we are not going to be able to strengthen the team as we had thought," he warned.

The head of the Galician team was very harsh with the midfielder, of whom he says that "his only purpose is to discredit Celta" and that he has committed "a betrayal of the club, the institution and the quarry".

"There has been a player who has been carrying out a great smear campaign against the club for a year on his social networks, in unconfirmed information and in opinions," said Mouriño, who described Suárez's situation as "irreversible."

The Celtic president reported that "more or less" they had a problem "not with him, with all the players who belonged to an agency" including Iago Aspas. "We are looking for a correct and friendly solution. Two days after the incident happened with most of the players, we hugged each other, they stayed with Celta and not with the representation agency that Denis (Suárez) had," he warned.

The decision that the midfielder took then did not sit well with the club. "If we call him by his name, we feel very betrayed with that operation," he said. Since then, the club has been looking for a way out for the footballer. "Denis had a whole year to find a team, but he wanted to go free and he didn't. We're not going to help him anymore, it's past for us," he asserted.

"We have given him four offers from teams and some paid him more than Celta, but since they benefited us because he charged or changed one player for another, he rejected them all. There was a team that paid him 12 million euros net in three years and He rejected it for harming Celta. In another team that played in the Champions League and offered us a certain player swap, he asked for a millionaire so that the operation would not be done. He did not want to leave under any circumstances," Mouriño assured.

For the president, the midfielder "does not want to leave" because he wants to "exclusively force" him to go free to another team "and earn more money." "What Denis is doing is forcing us to fire him and he can have a prize for having betrayed Celta. I'm not going to allow that, nor consent, I'm going to fight against that," he stressed.

"Let him do what he wants to do, sue us, continue doing his advertising, move his social networks, we are not going to move. Denis is not going to leave Celta if it is not because Celta accepts a transfer. There is a contract to fulfill, he we pay and he stays," he said.

In this sense, he is clear that "in the first league game" he will go to Balaídos "no matter what happens" with Denis Suárez "with his head held high" for the decisions he has made, even if they cost him "some whistle" because they were the right for the club.

The president of the Vigo team also valued the case of Santi Mina, recently reinstated at the club after his conviction for sexual abuse. "As in the case of Denis, we have obtained two teams for him to go play outside of Spain, but he wants to go free, we return to reward those who do badly," he lamented.

"I am not going to liquidate his contract and pay him what he wants so that he goes to the same team that I offered him. That situation is also irreversible, as is Denis's," said Mouriño, who when asked why he did not include in the contract a clause to terminate the player in case he was convicted, he recognized his mistake. "It was my duty to take that precaution, but I didn't," he confessed.

"It's something that I also wonder about. At that time we got carried away a lot. He was a player who was in tremendous doubt, he and his lawyers convinced us that he hadn't done anything and that they wanted to extort him. In that return operation I was wrong, thinking about what happened later, I admit it," he remarked.

Currently, the striker is "training with the rest." "He has a sentence that is not final and he has the same rights as the others. We will continue to pay him at the time, but he has done us serious harm and we will make the necessary claims when the sentence is final," he declared.

On the possibility of resolving his contractual situation in the short term, Mouriño does not hide that it is "a problem". “If I terminate him, I have to pay him the entire contract, then I am rewarding him. He makes a mistake, I pay him the three-year contract and tomorrow he signs for another team. That is not feasible in any company, we are not going to do it ", he pointed out.

Finally, the president left the coach, Eduardo Coudet, out of these situations, whose opinion he describes as "very valid as long as he does not interfere in the decisions of the board." "With Coudet we have a great relationship, but there are things that are exclusively for the club and in which no one can intervene. He has our full support, he directs the team, but there are things in which he cannot intervene," he settled.