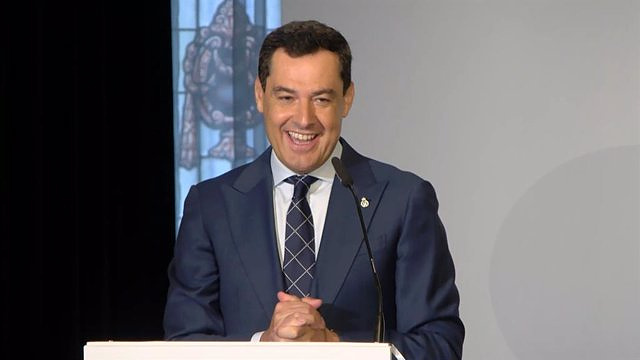 AUDIO: Link to audio file available at the end of the text.

The president of the Junta de Andalucía, Juanma Moreno, announced this Monday that the Governing Council will approve at its meeting tomorrow the abolition of the wealth tax in the autonomous community and a new reduction in personal income tax.

This was stated during his speech at the forum organized by the Joly Group in Madrid, where he also announced the abolition of the water canon for one year, which will mean savings for families and SMEs of 140 million on the water bill . He has indicated that these new fiscal measures will place Andalusia as the second community with the least fiscal pressure in Spain, after the Community of Madrid.

Regarding the abolition of the wealth tax, he has indicated that he wants to encourage certain incomes, who already spend long periods in Andalusia, to establish their residence here, contributing with their taxes in the community. He has indicated that the bonus will be one hundred percent and will have hardly any negative impact on the accounts of the regional administration because it barely represents 0.6% of what is collected, while it will "attract investment capacity to promote activity economy and employment.

He has been convinced that it will encourage individuals to establish their tax residence in Andalusia, which will contribute to an increase in taxpayers for personal income tax and other forms of indirect taxation that is much more relevant than the loss of wealth tax. This tax, as he added, has been a "brake on investment" and the departure of Andalusia of taxpayers with high net worth.

The Governing Council, as he added, will give the green light tomorrow to the sixth tax reduction in Andalusia, with tax reductions "powerful and closely linked to the middle and working classes and to small and medium-sized companies". He has pointed out that the objective is that only next year 360 million euros remain in the pockets of Andalusians, helping them to mitigate inflation.

It is, as he pointed out, to adapt the tax burden to the economic situation and encourage families to have the highest disposable income. Thus, tomorrow it will be approved that in the IRPF taxation, on the one hand, the rate in the first 3 income brackets will be deflated by 4.3%, so that the salary increases to compensate for inflation do not imply a higher payment of taxes and, on the other hand, the amounts that are exempt from personal income tax will be increased by 4.3% in application of the personal and family minimum corresponding to the regional section.

In this way, according to the president, the part of the income for which it is not taxed will be increased, since it is necessary that it be used to "cover basic needs whose price has increased."

Juanma Moreno has stated that already in the last legislature, that of the first Government of the PP in Andalusia, an ambitious tax reform was carried out that has been shown to be "clearly effective", with a massive drop in all taxes assigned by the State to the community (IRPF, successions and donations, assets, transfers and documented legal acts or public fees), which led to an increase in collection because there are more taxpayers, donations or purchase-sale of real estate.

900 MILLION EUROS WILL REMAIN IN THE HANDS OF FAMILIES

He explained that the successive tax cuts that have been approved so far represent a saving of 540 million euros per year, so that with the new cut that will be approved tomorrow, in 2023, "a total of 900 million euros will remain in hands of families. He has pointed out that, with less taxes, in the last legislature revenues increased by 1,100 million euros.

As he has pointed out, the "fallacy of the left" that lowering taxes does not increase income is not true and he has indicated that during the period of the PSOE governments, this community was considered a "fiscal hell", something to which it has already ended. He has stressed that lower taxes, administrative simplification and battle against bureaucracy must be fundamental objectives.

Moreno has indicated that his Government has asked the National Executive to make the necessary changes in the withholding regulations and to take the "same measures" in the personal income tax section corresponding to the State. He has added that no government should remain "untouched by the enormous deterioration in people's well-being."

Audio: Moreno announces the abolition of the wealth tax in Andalusia and a new drop in personal income tax

‹ ›
Keywords:
Junta De AndalucíaDeclaración De La RentaJuanma Moreno
Your comment has been forwarded to the administrator for approval.×
Warning! Will constitute a criminal offense, illegal, threatening, offensive, insulting and swearing, derogatory, defamatory, vulgar, pornographic, indecent, personality rights, damaging or similar nature in the nature of all kinds of financial content, legal, criminal and administrative responsibility for the content of the sender member / members are belong.
Related News