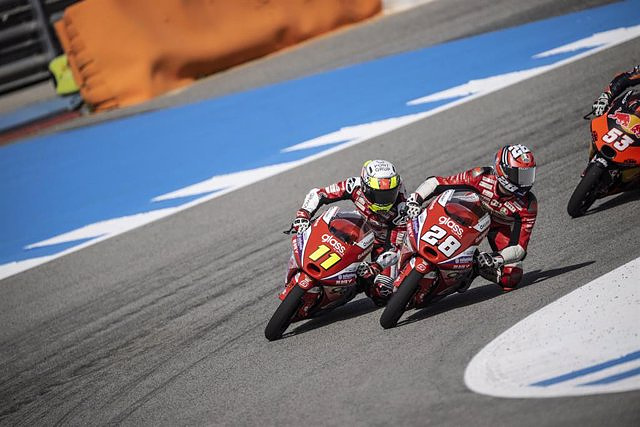 The Brazilian rider Diogo Moreira (KTM) has won pole position for the Moto3 race of the British Grand Prix, the twelfth round of the Motorcycle World Championship and the first after the summer break, ahead of the Spanish Izan Guevara (GasGas), while the World Championship leader, Sergio García Dols (GasGas), will start eleventh looking to defend his privileged position in the general standings.

In this way, Moreira conquers the first pole of his life and also the first for a Brazilian in the small category, leading the successful day of the MT Helmets-MSI, which managed to get his other pilot, the Japanese Ryusei Yamanaka, to rise to the front row of the grid, third.

Meanwhile, Guevara, three points behind García Dols in the championship, will have a golden opportunity starting from second place to take the lead from his teammate from the Gaviota GasGas Aspar Team, who will have to climb positions if he wants to stay at the top of the driver table.

On the first Saturday of pole positions after more than a month of vacation, the Japanese Kaito Toba (KTM) established the first great reference time, which lasted until the Brazilian Diogo Moreira (KTM) signed a 2:10.951 to less than eight minutes that earned him to break the pole record at Silverstone.

Nobody could beat the time of the South American, who will command the front of the grid together with Guevara and his teammate Yamanaka. In addition to the eleventh place from the Burriana, Dani Holgado (KTM) will start the event twelfth, Xavi Artigas (CFMoto) will do fifteenth and Iván Ortolá (KTM), eighteenth.

Among those who did not make it through Q2, David Muñoz (KTM) will start nineteenth, just ahead of Adrián Fernández (KTM), Jaume Masià (KTM) and Carlos Tatay (CFMoto), and Ana Carrasco (KTM) and Marc García (KTM). ) will start from the bottom of the grid.