More than 15,000 people have visited Congress since its 'reopening' after the pandemic 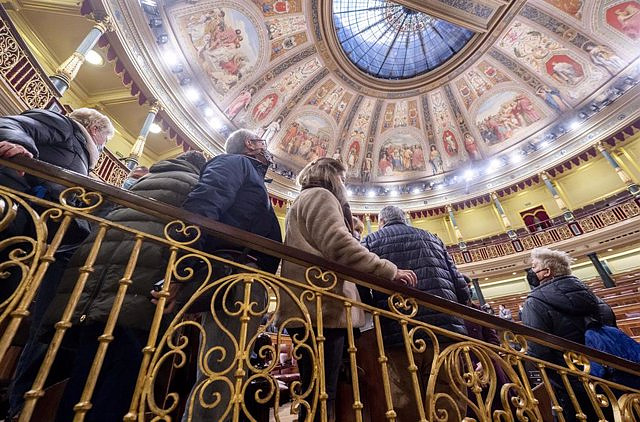 More than 15,000 people have visited the Congress of Deputies since last December, the bulk of which (10,760) did so from March, when the institution resumed guided tours after the forced stoppage due to the pandemic.

The Congress was also able to celebrate its Open Days again last December after the suspension, for the first time, of this activity since its launch in 1997. For two days, 3,864 paraded through the Palacio de la Carrera de San Jerónimo people by appointment, in order to maintain the permitted capacity and guarantee health prevention measures.

In May of this year public attendance at the plenary sessions was reactivated, since then 716 people have followed the debates in the hemicycle from the guest gallery.

Among the groups that have made organized visits this year, the majority group is once again that of students, with 6,089. The most numerous are high school (2,051) and secondary education (2,451). University students (1,209), training cycle students (244) and foreign students (134) have also attended the Congress.

The second group is made up of individual visits, with 4,722 people. These visits take place on Mondays and Fridays at 12:00 and on Saturdays from 10:30 to 12:30, every half hour. This group also includes the visits during the Open Days, which with 3,864 people account for the bulk of these entries.

In addition to the students and the individual visits, another 4,245 people attended the Congress in group visits organized by different groups. Among them, the most numerous was that of various associations (1,912), followed by representatives of professionals and businessmen (458) and those from cultural centers (385).

The month in which the Congress has received the most visits during the last year has been December, which has concentrated 4,296 visits due to the celebration of the aforementioned Open Days, which in 2021 were held on December 3 and 4. The following months with the most visits are May, with 2,273 people, and June, with 2,172.

With regard to attendance at plenary sessions, the month with the most entries was June, when 219 people, of which 158 were students, witnessed the development of the plenary sessions live.

By autonomous communities, the region from which the majority of visitors come is the Community of Madrid with 61.94% of the total. Although it is the community that contributes the most visitors throughout all the months of the year, among the 8,746 people who come from Madrid, all those who attend the Open Days and individual visits are counted.

The second community with the most visitors is Castilla-La Mancha with 1,009 people, which represents 7.15% of the total, and the third is Andalusia with 829 people, 5.87% of the total.

With regard to public attendance at the Plenary, the community that contributes the most visitors is Madrid with 449 (66.82%), also including free shift attendees, followed by Castilla-La Mancha with 106 (15.77%). ) and Catalonia with 52 (7.74%). Due to its public nature, in all plenary sessions a number of seats are reserved in the stands so that citizens of legal age can attend them.