Post a Comment Print Share on Facebook
Famagusta 26
DOLLAR 18,54
EURO 18,26
GOLD 988,81
BIST 3.146,89
Dogecoin Spike Fuels Meme Token Economy to a Huge Jump of Close to 10%
Report: Only 5.3% Spanish Crypto Investors have been notified to declare...
Why casinos do not allow kids to gamble
Payments giant Stripe launches pilot to test crypto payouts with Twitter
Vlad Ponomarev, CEO of Broxus, on Everscale and the Development of a Universal...
Quik.com now has Minting of.VR and.Metaverse Domains
The Biggest Movers: APE Up Almost 30%, ZIL, and AAVE are Wednesday's...
Paul Farhi, founder of Solidus AITECH, talks about Artificial Intelligence...
Malaysia holds over 600 people for stealing electricity to mine cryptocurrency
Central Bank of Sudan warns of risks associated with cryptocurrency 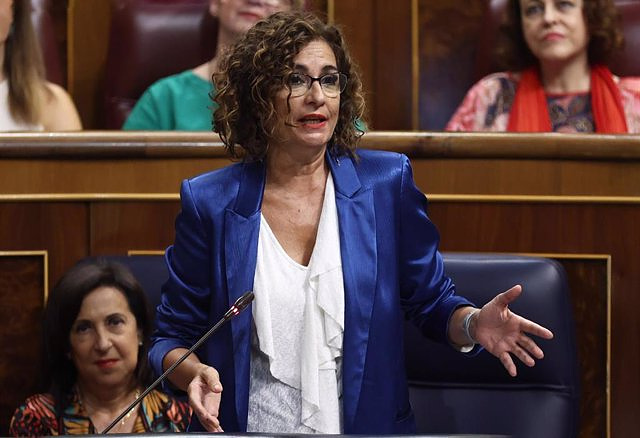 The Minister of Finance and Public Function, María Jesús Montero, has urged the Popular Party to publish the remuneration that certain leaders of the party "allegedly" receive at the expense of the party.

Can you commit here to publish the salaries that leaders of your party may be receiving by the Popular Party? What are they afraid of?", the minister asked the PP deputy, Mario Garcés Sanagustín, during the control session of the Government in the Lower House.

This week, the PSOE had already suggested to the leader of the PP, Alberto Núñez Feijóo, that he set an "example" and make a voluntary update of his declaration of assets, in order to clarify whether the PP hides part of his salary.

Montero has also charged against the Popular Party's fiscal model, which goes through "defending" the interests of electricity companies, oil companies, banks and large estates.

Thus, the head of the Treasury has criticized that, while voting against extraordinary taxes on energy and the financial sector, they eliminate taxes aimed at large fortunes, as has recently been announced in Andalusia with the Wealth Tax.

Faced with this, the PP deputy, Mario Garcés Sanagustín, has accused the Government of "dismantling the welfare state to generate the welfare of his own state, that of each of his ministers." The PP has offered the Executive to lower the VAT on the shopping basket of all Spaniards.

But the minister has responded by listing a series of basic products --electricity, gasoline, gas-- for which, as she recalled, the PP raised VAT when he governed.

‹ ›
Keywords:
AEATPPMaría Jesús Montero
Your comment has been forwarded to the administrator for approval.×
Warning! Will constitute a criminal offense, illegal, threatening, offensive, insulting and swearing, derogatory, defamatory, vulgar, pornographic, indecent, personality rights, damaging or similar nature in the nature of all kinds of financial content, legal, criminal and administrative responsibility for the content of the sender member / members are belong.
Related News