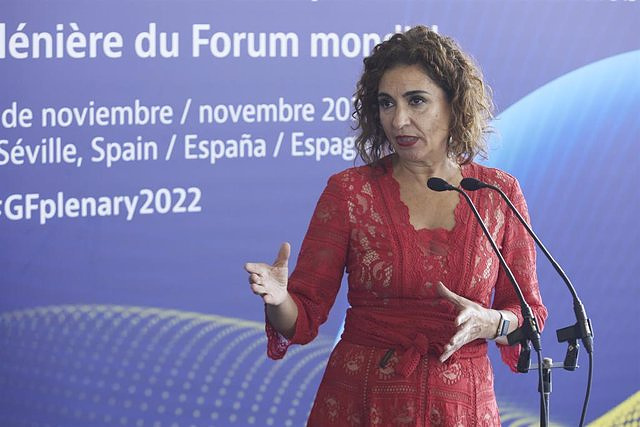 The Minister of Finance and Public Function, María Jesús Montero, considers it "serious" that the leader of the PP, Alberto Núñez Feijóo, does not qualify the words of the Madrid president, Isabel Díaz Ayuso, in which she has accused the Prime Minister, Pedro Sánchez, of wanting to establish a "de facto Secular Federal Republic" in Spain.

"What is serious here is not what Mrs. Ayuso says, what is serious is that Mr. Feijóo does not even qualify the words of Mrs. Ayuso, who has been qualified by the far right of our country," he pointed out in an interview in Cuatro , collected by Europa Press.

This is how the minister expressed herself after this Monday Ayuso encouraged "not to fall asleep" before the attempt of the Government and its parliamentary partners to "establish in Spain, outside the constitutional mechanisms, a de facto Secular Federal Republic".

Montero has assured that he prefers "not to go into these questions that one uses when there is no argument". "The disqualifications that the legitimate president of this country is receiving from those who call him everything (...) have to do with hyperbole," he added immediately.

Thus, he pointed out that it is "obvious" that Ayuso "puts the emphasis on those words so that he is not asked about the serious scandal that the Madrid health system is experiencing" due to the demonstration that took place yesterday in Madrid and that "It brought together thousands of people from Madrid who were protesting the conditions in which the service is being provided."

In this key, he has emphasized that it would be good for the leader of the PP to answer about what is the health model that he wants to implement in the different autonomous communities.

"This is not just an issue for Mrs. Ayuso, but in other autonomous communities governed by the Popular Party, a de facto privatization of public services is taking place, an impoverishment of quality, which is the path towards privatization and, therefore, Therefore, citizens have the right to know what is the health model that Mr. Feijóo intends," he settled.

‹ ›
Keywords:
AEATFeijóoPedro SánchezPPMaría Jesús MonteroDíaz Ayuso
Your comment has been forwarded to the administrator for approval.×
Warning! Will constitute a criminal offense, illegal, threatening, offensive, insulting and swearing, derogatory, defamatory, vulgar, pornographic, indecent, personality rights, damaging or similar nature in the nature of all kinds of financial content, legal, criminal and administrative responsibility for the content of the sender member / members are belong.
Related News