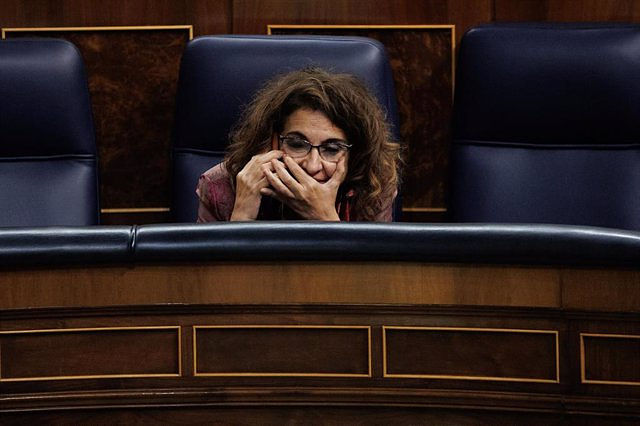 The Minister of Finance and Public Function, María Jesús Montero, has assured this Friday that the opposition uses the "easy" argument that the Government relies on ETA members, in reference to the pacts that throughout the legislature have materialized with EH Bildu, in order to "instill fear" and "discredit" the Executive.

"That of the ETA members seems to me the easy resource of the right when it loses arguments. What it brings up and revives is a situation that democracy defeated more than ten years ago and they bring it to light to instill fear and discredit the Government", he has assured in an interview on Cadena Ser, collected by Europa Press, when asked about the accusations of the opposition for his pacts with independentistas and ETA members.

Montero has pointed out, in this sense, that they are based on dialogue between those who "really" want to sit down to allow society to advance. "You cannot sit down to talk with those who from the first day have worked in the direction of overthrowing the Government (...) When their policy has been the 'no' to everything because they wanted the legislature to end," he argued the.

The minister has censored the "permanent" reproaches of the right to the Government for the fact that "it is understood with others" who "legitimately sit in Congress in defense of their interests." In addition, she has added that this support throughout the entire legislature has given "important stability" to the main bills that the Government has carried out with "differences", but "with a lot of dialogue."

"This has configured what has come to be called the investiture block, where we are such different people, such different groups, but we have had a common guide that has been the well-being of the citizens. That is what has prevailed," he assured straight away.

In relation to sedition, Montero considers that the repeal of the crime will not imply an electoral cost to the PSOE because, in his words, coexistence can never harm a party whose hallmark is precisely this. "No force has fought as hard as the PSOE for understanding between different territories and sensibilities to open up," he emphasized.

Likewise, it considers that "it has to be interpreted as a responsible contribution by Pedro Sánchez and his Government to overcome a situation that never had to occur."

‹ ›
Keywords:
BilduAEATETAMaría Jesús Montero
Your comment has been forwarded to the administrator for approval.×
Warning! Will constitute a criminal offense, illegal, threatening, offensive, insulting and swearing, derogatory, defamatory, vulgar, pornographic, indecent, personality rights, damaging or similar nature in the nature of all kinds of financial content, legal, criminal and administrative responsibility for the content of the sender member / members are belong.
Related News