Monedero maintains that Díaz is the best candidate but with respect for Podemos, with whom he has made "mistakes"

He believes that Iglesias was wrong to appoint her directly without an election process. 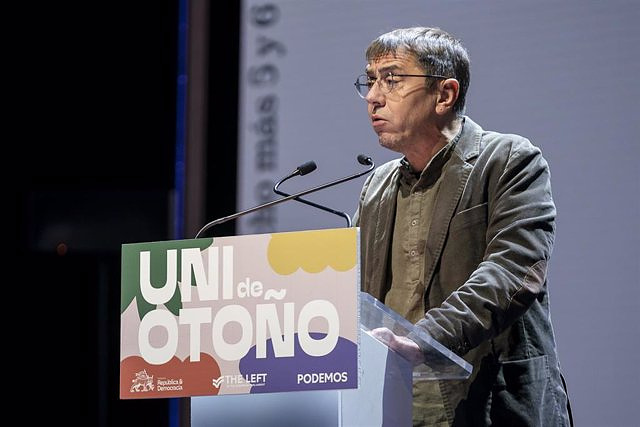 The co-founder of Podemos Juan Carlos Monedero has assured that the second vice president, Yolanda Díaz, is the ideal candidate to represent the unity of the left, but on the condition of respecting Podemos and its political legacy, "although she has made "mistakes" such as not accepting that the purple formation has "any kind of decision about what it does or undoes".

He has also opined that the former leader of the purple party, Pablo Iglesias, was right to choose her as successor within United We Can, but he was wrong "in the way" of appointing her directly, without calling a "deliberative and elective" process as befits the "tradition "Left politics.

In statements in 'La fábrica', the internet interview space conducted by the ERC spokesman in Congress Gabriel Rufián, Monedero stressed that the choice of Díaz as vice president and future candidate for the general elections was "ideal and continues to be ", but that it was a mistake to do it without a primary process.

The former leader of the party has lectured that Iglesias proceeded to name her as his successor, understanding that he was thus helping to make his departure from Podemos less traumatic and prevent Podemos from entering into a "sort of merriment" with an election process. However, he has opined that this appointment cannot be undertaken without the participation of the bases.

He has also opined that during this time Díaz has also made "many mistakes", such as attending the event in Valencia with the leader of Más Madrid, Mónica García, the former leader of Comprimís Mónica Oltra, and the mayoress of Barcelona, ​​Ada Colau, without the leaders of Podemos will be invited; or not attend events organized by Podemos.

"Iglesias points to Díaz, Díaz accepts and agrees to be vice president, but then Yolanda does not accept that we can have any kind of decision in what she does or undoes, because the choice has not been correct and that leads to Yolanda having made mistakes" , has reiterated the co-founder of Podemos.

He has also reported that Díaz's attitude led many Podemos militants and the left to a climate of "estrangement" that was understandable, until in the last summer course of the Complutense University the second vice president recognized the value of Podemos , that he was working on Sumar and that later it would be time for the games.

And it is that for Monedero that message served for Podemos to achieve its "self-esteem" and to be supported by Díaz in the face of the attacks received by the "sewers" and after the left-wing coalition 'For Andalusia' ended up as the "rosario de la aurora", where the purples agreed not to top the list.

From there, the also political scientist has highlighted that after the Andalusian elections Podemos decides that it is not going to lose its name in the May elections and is going to devote part of its energy to strengthening itself as a party.

Therefore, he has endorsed that Díaz is the ideal candidate to "represent" all those "fragments" that have emerged in the progressive wing due to the "clumsiness of the left", who is always "fighting" looking for what separates them instead of to get together, but on the condition of respecting Podemos.

Then, Monedero has lectured that in Spain there seems to be a left that "seems to apologize" to the system and that, like the novel 'The Great Gatsby', seems to want to be "received in large halls" and with a "class awareness of not be valid enough for the "aristocracy and nobility to recognize them" "If you are from the left you have to be with yours," he emphasized.

Finally, and regarding the leader of Más País, Íñigo Errejón, he has opined that he was number two of Iglesias but that "ambition blinded him" and led him to do "nonsense", such as splitting and setting up another party when the party did not condemn him to "ostracism" after Vistalegre II but rather gave him the chance to be his candidate in Madrid. What's more, he has stressed that without his "adventure" with Más País in the general elections, Vox would now not have 53 deputies.