Moncloa and Genoa, satisfied with the performance of their leaders in the Senate 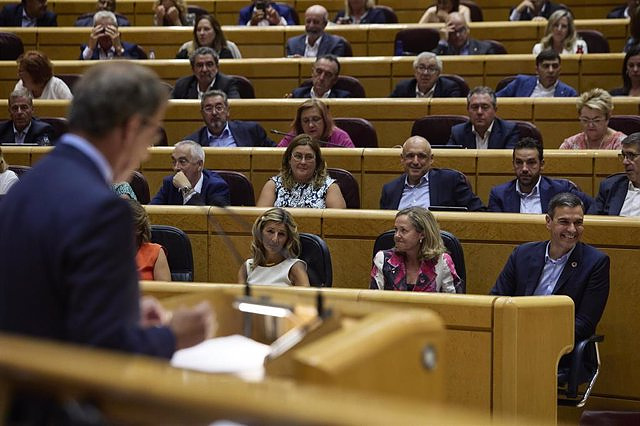 Both from the Palacio de la Moncloa and from the national leadership of the PP on Génova Street they make a positive assessment of the result of the debate held this Tuesday in the Senate between the President of the Government, Pedro Sánchez, and the leader of the 'popular', Alberto Nunez Feijoo.

The head of the Executive asked to appear in the Upper House to talk about energy and its economic consequences after this debate was claimed by the leader of the 'popular', with a seat in the Senate but not in Congress.

From the Government they believe that they have fulfilled their objective: to give a message of "tranquility" to the Spanish and "dismantle" Feijóo's image of solvency. Government sources assure that the appearance and the scuffle with the president of the PP have fulfilled the planned script.

Moncloa asserts that Sánchez has made a first intervention aimed at citizens to convey calm, serenity and convey the message that the Government is willing to do what is necessary to protect the population. And a second part of his speech has been aimed at countering Feijóo and "putting the 'popular' leader in front of the mirror, contrasting his messages and proposals with reality.

Faced with this, from the Executive they believe that Feijóo has been "disorderly" because he did not expect the president's "solvent" speech and has made a "disorderly" reply full of "common places".

On the other hand, in Genoa they believe that the winners of the debate have been them and they are satisfied with the result. As reported, they expected an appearance based on energy and the economic situation, but they denounce that instead Sánchez has disqualified Feijóo, to which he has dedicated up to an hour of his intervention.

In fact, from the PP they maintain that Sánchez sometimes seemed the leader of the opposition instead of the president of the Government for his attacks on Feijóo. Sánchez's references to Galicia have also surprised the PP.

"We thought that we came to listen to energy proposals and not insults," say the 'popular', defending that the measure announced by the president to extend the cap on gas to companies has also been copied from the PP.