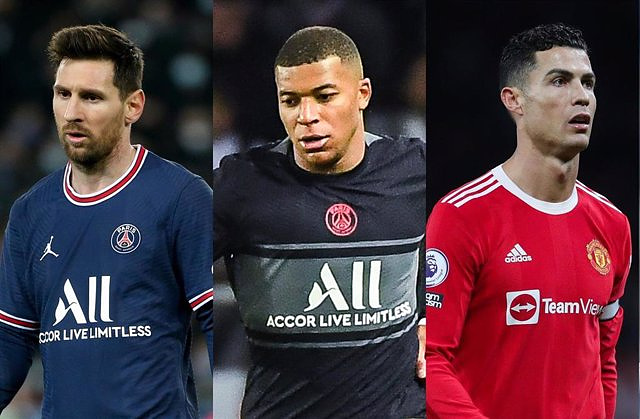 French striker Kylian Mbappé is the highest paid footballer in the world with 128 million euros, ahead of Leo Messi and Cristiano Ronaldo for the first time, according to the list compiled by Forbes magazine.

PSG's millionaire bet on Mbappé, who gave up going to Real Madrid, places the French international as the best paid with those 128 million, for Messi's 120, second, and Cristiano's 100, third.

Since 2014, the Argentine and the Portuguese have held the first two positions on this list that Forbes traditionally compiles with the annual income of soccer players. Neymar (PSG), with 87, and Mohamed Salah (53), from Liverpool, complete the 'Top 5'.

Among the 10 best paid appears a Spaniard, Andrés Iniesta, who at 38 is still active in Vissel Kobe and his earnings are estimated at 30 million euros, ninth on the list.

‹ ›
Keywords:
Cristiano RonaldoMessi
Your comment has been forwarded to the administrator for approval.×
Warning! Will constitute a criminal offense, illegal, threatening, offensive, insulting and swearing, derogatory, defamatory, vulgar, pornographic, indecent, personality rights, damaging or similar nature in the nature of all kinds of financial content, legal, criminal and administrative responsibility for the content of the sender member / members are belong.
Related News