The minister informs them of the facts so that they "evaluate possible actions" in case it could happen in other countries. 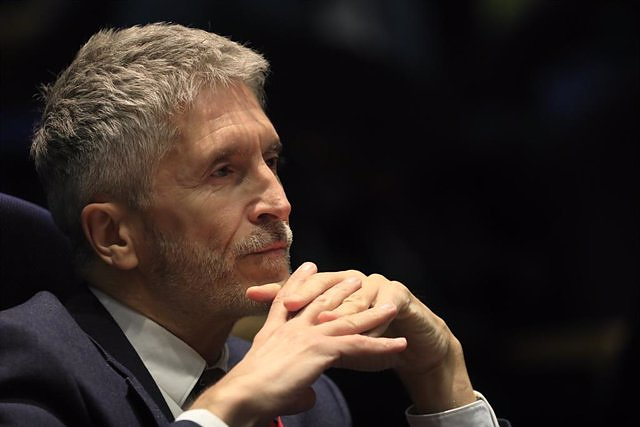 The Minister of the Interior, Fernando Grande-Marlaska, has sent a letter to his European partners as well as to the European Commission in which he warns that the six letters with pyrotechnic material sent to the Prime Minister, Pedro Sánchez, as well as to the embassies of Ukraine and the United States, among others, "could be related to the invasion of Ukraine by Russia" if they want to take action on it.

In the text, to which Europa Press has had access, the minister reports on the six packages detected with pyrotechnic material, the first of which was sent to the Moncloa Palace on November 24 and addressed to Pedro Sánchez.

To these were added two received by the Embassy of Ukraine on Wednesday and that of the United States on Thursday, as well as the Ministry of Defense, the Satellite Center of the Torrejón de Ardoz air base (Madrid) and the arms company Instalaza in Saragossa. Only in the case of the arrival at the Ukrainian Embassy was there an injury, a worker who opened the envelope and suffered injuries to his hands.

According to Marlaska, "pending the progress of the investigations and the results of the analyzes of a different nature that are being carried out by experts from the National Police, both the characteristics of the envelopes and their content are similar."

Thus, the head of the Interior explains that he considers it "necessary to inform the European institutions and the member and associated states of these events, which could be related to the invasion of Ukraine by Russia, to evaluate possible actions and in the event that they are similar incidents occur in other countries.

The Ministry of the Interior reported this Thursday that the incense device contained in the six envelopes - all deactivated with the exception of the one that arrived in Torrejón - is homemade and causes a "deflagration with a sudden flame".

The investigation indicates that the letters have been sent from Spain. These are brown envelopes with "similar characteristics", including the coincidence in calligraphy.

The existence of these letters was reported after the announcement on Wednesday from the Ukrainian Embassy in the capital, although the first was the one sent to Moncloa on November 24 and addressed to the President of the Government. An employee was slightly injured when handling a package that was addressed to the ambassador, Sergei Pohoreltsev.

At night, the receipt of another letter was confirmed, sent to the director of the Instalaza company in Zaragoza, a manufacturer of weapons that is sent to Ukraine in its defense against the invasion of Russia.

This Thursday morning another envelope addressed to the director of the European Union Satellite Center was detected at the Torrejón air base. It is the only one of all that has not been detonated in a controlled manner by the TEDAX, so it may be key in the investigation.

The fifth confirmed was also sent on Thursday morning to the Ministry of Defense for the attention of the minister, Margarita Robles. The US Embassy in Madrid detected shortly after a sixth package with pyrotechnic material of "similar characteristics" to those neutralized in the last week.

Marlaska's letter is addressed to the heads of the Interior of the rest of the EU member states, as well as to the European Commissioner for the Interior, Ylva Johansson, and the president of the Eurochamber of Liberties commission, the Spanish Juan Fernando López Aguilar , as well as the executive director of EUROPOL, Catherine de Bolle, and the EU anti-terrorism coordinator, Ilkka Salmi.

To all of them, he explains that the investigation of the shipments has been taken over by Court Number 4 of the National Court and also that it has ordered "an increase in security measures around the diplomatic legations present in Spain, as well as as in other areas of special protection", which comes in addition to the reinforcement of security decreed after the start of the war in Ukraine last February.

‹ ›
Keywords:
UcraniaEstados UnidosComisión EuropeaPedro SánchezMarlaska
Your comment has been forwarded to the administrator for approval.×
Warning! Will constitute a criminal offense, illegal, threatening, offensive, insulting and swearing, derogatory, defamatory, vulgar, pornographic, indecent, personality rights, damaging or similar nature in the nature of all kinds of financial content, legal, criminal and administrative responsibility for the content of the sender member / members are belong.
Related News