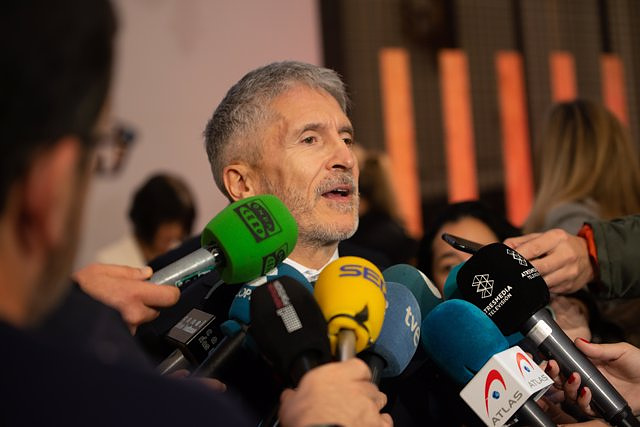 The Minister of the Interior, Fernando Grande Marlaska, has defended this Friday that the eight hours of recordings of the tragedy in Melilla, in which at least 23 migrants died - some 70 according to the NGOs, shows that there were no deaths in Spanish territory and that the Civil Guard used "proportional means" to deal with the "violent attack" against the border.

In statements from Brussels where he attended the extraordinary meeting of European Home Affairs officials to discuss the migration issue after the 'Ocean Viking' crisis, the minister insisted that the security recordings show a "proportional action" by Spanish agents in Melilla, defending Spain's "legal and proportional" response to the assault in which "there were no deaths on national territory."

On the accusations of the Spanish Commission for Refugee Aid (CEAR) in the European Parliament that pointed to an "unprecedented tragedy at the EU border" and criticized the passivity of the Spanish authorities in the face of a situation of "disproportionate violence", the The minister has stressed that the one who "knows and studies the images cannot determine that".

In addition, he has criticized that the viewing of the Interior spokesmen of the Congress of Deputies behind closed doors was not the complete version, of eight hours of recording, but a "partial" one. This is due to "previous, somewhat biased and very subjective interpretations", the head of the Interior said, concluding that the video reflects the "legal and proportional" action of the Spanish forces.

Regarding his pending appearance in the European Parliament on this matter, Marlaska has explained that he has no objection to going to the European institution but has indicated that we must "wait for the right moment", taking into account that there are open investigations into the tragedy in border.

‹ ›
Keywords:
Guardia CivilInmigraciónMarlaska
Your comment has been forwarded to the administrator for approval.×
Warning! Will constitute a criminal offense, illegal, threatening, offensive, insulting and swearing, derogatory, defamatory, vulgar, pornographic, indecent, personality rights, damaging or similar nature in the nature of all kinds of financial content, legal, criminal and administrative responsibility for the content of the sender member / members are belong.
Related News