"You could well spit in our faces; here is my face, the affront would not be greater," said Salvá, father of a murdered civil guard. 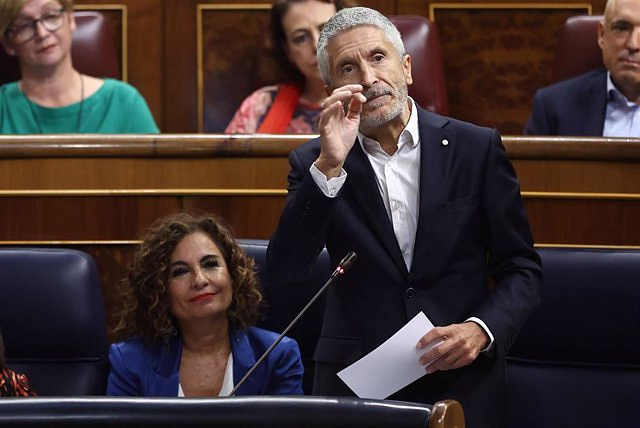 "You could well spit in our faces; here is my face, the affront would not be greater," said Salvá, father of a murdered civil guard

The Minister of the Interior, Fernando Grande-Marlaska, has defended this Wednesday in Congress that the approach of ETA prisoners is carried out in compliance with the prison law to avoid "social exclusion" once the policy of dispersion after the defeat of the terrorist group.

Grande-Marlaska has responded in this way to the Vox deputy Antonio Salvá, with whom he has crossed reproaches after showing him his respect for being a victim of ETA, since he is the father of the civil guard Diego Salvá, murdered along with Carlos Sáenz de Tejada in the attack in Palmanova in 2009, one of the more than 300 unsolved cases.

"You could well spit in our faces explicitly, here you have my face and you spit on me, the affront would not be greater", Salvá pointed out in the control session to the Government, showing his rejection of the "disguised pardon" for the third degrees that it promotes the Basque Government and the PNV for the benefit of ETA prisoners brought to prisons in this autonomous community.

Grande-Marlaska had an initial moment of doubt after listening to Salvá. "I don't know what to say to him, whether to let time pass in silence", he has started his reply, adding that the Government complies with the penitentiary law.

"The transfers are the application of the law, it is a right to serve the sentence in the vicinity of the home to avoid social exclusion. The policy of dispersion was an anti-terrorist policy; once ETA is defeated, it disappears," argued the Minister of the Interior.

Grande-Marlaska has made Salvá's tone ugly, pointing out that the Vox deputy has "spit on another victim who today is a politician", referring to himself and his time as a judge of the National Court. In addition, she has made it ugly that prison officials and judges, who are in charge of "controlling prison sentences," are "put into question."

The minister has maintained that the approaches of ETA prisoners, like any other inmate, is carried out with "individualized and scientific studies" and that it is the prison treatment boards who propose such transfers.

"You have disrespected those officials who were the target of ETA," he added, adding that "not everything goes" against an "absolutely democratic and legitimate" government.

In his turn, Salvá has reproached that the victims of ETA "rot in oblivion" and that, while his son's executioners have not yet been identified, tributes to members of the terrorist group continue in the streets of the Basque Country and Navarre.

"ETA's bullet kills three times", Salvá concluded, referring to the victim of the attack, the politicians who betrayed them and oblivion, "which is where you intend to take the victims".

‹ ›
Keywords:
ETATerrorismoMarlaskaVOX
Your comment has been forwarded to the administrator for approval.×
Warning! Will constitute a criminal offense, illegal, threatening, offensive, insulting and swearing, derogatory, defamatory, vulgar, pornographic, indecent, personality rights, damaging or similar nature in the nature of all kinds of financial content, legal, criminal and administrative responsibility for the content of the sender member / members are belong.
Related News