Interior offers to host the second world congress of victims and commits 400,000 euros to an international solidarity fund. 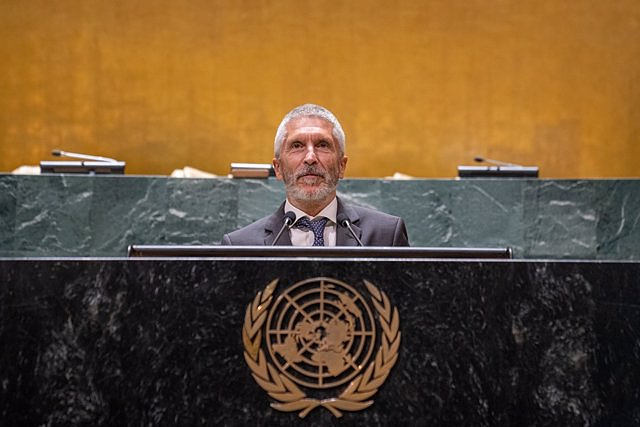 Interior offers to host the second world congress of victims and commits 400,000 euros to an international solidarity fund

The Minister of the Interior, Fernando Grande-Marlaska, defended this Thursday from the UN headquarters in New York the Spanish model for defeating terrorism and promoting "pioneering" legislation to care for victims, thanks to the "wide political consensus And social". "We Spaniards have decided not to forget", he maintained in a speech where he praised the "ethical example and colossal dignity" of the victims.

"Spain is proof that democracy and the rule of law can defeat terrorism", said Grande-Marlaska at the opening of the first World Congress of Victims of Terrorism, which is being held this September 8 and 9 and which seeks to improve attention to this group. "Spanish society has prohibited by law the loss of his memory," she maintained.

The minister's agenda has included bilateral meetings with representatives of the UN and countries such as Iraq, as well as a floral offering at the 9/11 memorial and a screening of the film 'Maixabel'. The work of the Memorial Center inaugurated in Vitoria in June 2021 has also been promoted.

"We must work every day supported by the memory of the victims to achieve the absolute defeat of terrorism," he defended before the UN plenary. "We must remember the victims, vindicate their sacrifice and their example", he continued, "they are the ethical and moral reference of our democratic values".

Grande-Marlaska stressed that memory "is justice for the victims and it is also proof that this world does not tolerate that the injustice of oblivion is the price of peace and freedom."

The former judge of the National Court has placed Spain "at the forefront of victory" against terrorism, citing the State Security Forces and Bodies, judges, prosecutors, prison officials or councillors.

"The core of its success was based on a solid and broad political and social consensus" based, as he said, on the "unwavering" commitment to democratic values ​​and the "ethical example and colossal dignity of the victims of terrorism and their families".

Grande-Marlaska has valued the "pioneering law in the world", 29/2011 on the Recognition and Comprehensive Protection of Victims of Terrorism, which was unanimously approved by the Spanish Parliament and which recognizes the right to comprehensive reparation. "It consists not only of economic compensation, material aid or medical and psychological care, but also includes measures aimed at their moral reparation," she said.

The head of the Interior has advocated that the UN world congress be the "genesis of an efficient mechanism that allows the pending account to be settled with the victims of terrorism under the protection and encouragement of the UN".

"The United Nations can always count on Spain as the strongest ally in any initiative to recover and disseminate the memory of the victims because we owe it to them, because their memory challenges us and summons us all to delegitimize violence and the creation of a pedagogy of 'never again'", he emphasized.

Prior to the inauguration of the congress, Grande-Marlaska attended last night, along with Vladimir Voronkov, United Nations Assistant Secretary General for the Office for the Fight against Terrorism, at the screening at Lincoln Center in New York of the film 'Maixabel' , which revolves around restorative justice for encounters between victim and terrorist.

The event was organized by the Permanent Representation of Spain to the United Nations and the Reina Institute. Before the screening, Maixabel Lasa, widow of socialist leader Juan María Jáuregui and on whom the film is based, and Amy O'Neill, victim of the 2013 Boston Marathon bombing, took part.

Grande-Marlaska and Voronkov also held a bilateral meeting underlining Spain's "firm and unquestionable" commitment to the fight against terrorism. "We were the first non-permanent member of the Security Council to chair the Counter-Terrorism Committee and we have facilitated in 2021 the seventh review of the Global Counter-Terrorism Strategy," the minister recalled.

The congress adds to other initiatives adopted in recent months and that led the United Nations to celebrate the High-Level International Conference on Human Rights last May in Malaga. It also highlights the process of opening a regional headquarters of the Office for the Fight against Terrorism in Madrid, which will come into operation in 2022.

In addition to the intervention in the opening session of the minister, the panel of the Spanish delegation is completed with the intervention of the president of the Victims of Terrorism Foundation, Tomás Caballero, and Vera de Benito, victim of the 11-M train attack from Madrid. Representatives of Spanish associations such as AVT have also traveled to New York.

‹ ›
Keywords:
TerrorismoOnuMarlaska
Your comment has been forwarded to the administrator for approval.×
Warning! Will constitute a criminal offense, illegal, threatening, offensive, insulting and swearing, derogatory, defamatory, vulgar, pornographic, indecent, personality rights, damaging or similar nature in the nature of all kinds of financial content, legal, criminal and administrative responsibility for the content of the sender member / members are belong.
Related News