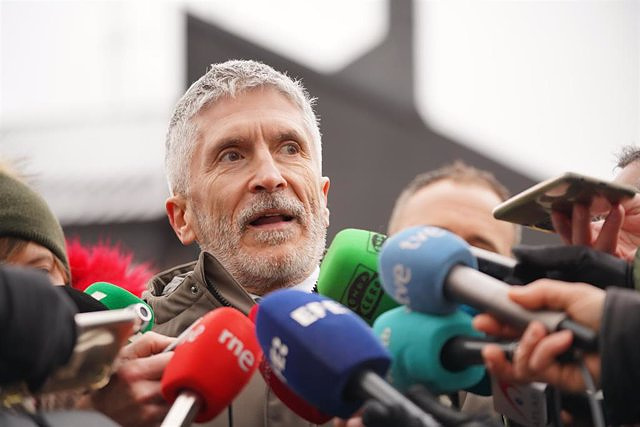 The Minister of the Interior, Fernando Grande-Marlaska, has confirmed that an entry and search procedure took place this Thursday of the house occupied by the man detained for killing a sacristan with a machete outside the church of Nuestra Señora de La Palma de Algeciras (Cádiz) and injuring several people and has indicated that there are no third parties involved in the events.

The young detainee lived for rent in a 'patera floor' with many people, according to police sources detailed to Europa Press. In addition, he was in an irregular situation and his expulsion was pending.

Speaking to the media from Stockholm, where he was going to participate in a meeting with his EU counterparts, the minister highlighted this procedure, the development of which "may determine the nature of the events, their terrorist nature or any other nature that may derived from the same."

In addition, he has stressed that the investigations are being carried out "quickly and as appropriate", as was the case, in his words, "the arrest of the alleged perpetrator of the events". "Immediately when this occurred," he stressed.

Thus, he has stressed that they are going to work to conclude what happened and what were the purposes of this person. The minister, likewise, has realized that this morning he will travel to Algeciras to "learn" about the investigation.

He has also taken the opportunity to express the Government's condolences to the family of the person murdered and also to wish for the fastest recovery of the injured, at the same time that he has conveyed a security message to the people of Algeciras. "They can feel safe, we have absolutely professional, capable State Security Forces and Bodies and there is no problem in that regard," she added.

Interior recalled that the National Police and Civil Guard troops in Campo de Gribaltar have grown by 31 percent since the departure of the PP from the Government, with the governments of Pedro Sánchez. Specifically, the region has gone from having 1,956 agents from both bodies (Dec. 2017) to having 2,579 (Aug 2022). With regard to Algeciras specifically, the city has gone from having 1,201 agents to the current 1,363

‹ ›
Keywords:
AlgecirasPalmaDetencionesMarlaska
Your comment has been forwarded to the administrator for approval.×
Warning! Will constitute a criminal offense, illegal, threatening, offensive, insulting and swearing, derogatory, defamatory, vulgar, pornographic, indecent, personality rights, damaging or similar nature in the nature of all kinds of financial content, legal, criminal and administrative responsibility for the content of the sender member / members are belong.
Related News