Marlaska attacks the PP and other groups for the Melilla tragedy: she denies deaths in Spain and neglect of the injured

Demands a rectification to those who ask for his resignation guided by "falsehoods and indignities". 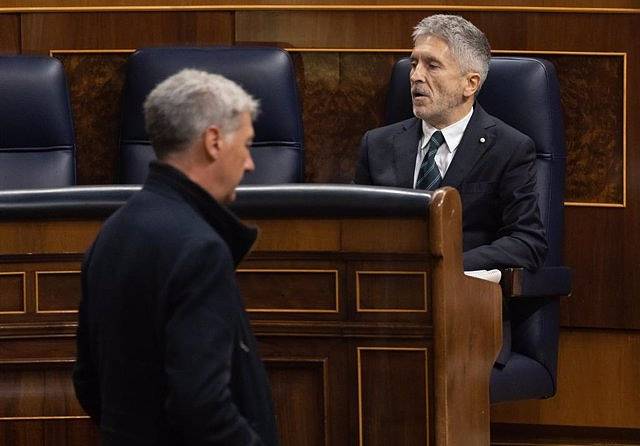 The Minister of the Interior, Fernando Grande-Marlaska, has taken advantage of his second appearance before the Plenary Session of Congress to report on the tragedy in Melilla on June 24 to reiterate that there were no deaths on the Spanish side of the border and to deny neglect of health care to the wounded. In addition, he has demanded a correction to those who ask for his resignation guided by "falsehoods and indignities."

In his speech, he mainly attacked the PP, which has demanded his resignation after the new Lighthouse Reports investigation, and also indirectly against other groups, including government partners, for linking what happened on 24-J not with an "intolerable violent attack" on the border but with the impossibility of requesting asylum by sub-Saharans.

After increasing the criticism of the political groups against his management of the past 24-J, Grande-Marlaska has insisted that the deaths were registered in Nador (Morocco) and has defended the "proportionality" of the Civil Guard, separating its operation from the at least 23 deceased.

He has also defended that the rejections at the border from Spain were carried out in compliance with the law and after "verifying that there were no vulnerable people".

"There are no other facts, no matter how much it bothers those who, from their bias and their preconceived truth, would like another truth, which they want to build but which does not exist," said Grande-Marlaska, who also lamented that "cadastral arguments are twisted "On the delimitation between Spain and Morocco".

In his appearance, Grande-Marlaska mentioned the appearance yesterday of the PP leader Esteban González Pons, interpreting that it led to future lawsuits against the civil guards to whom, he has said, the Ministry will offer assistance if necessary.

"It is an action for which I assume full responsibility. I gave the order to protect our border, and I would give it again," he said, demanding a rectification from the PP for its "falsehoods and indignities."

‹ ›
Keywords:
PPMarlaska
Your comment has been forwarded to the administrator for approval.×
Warning! Will constitute a criminal offense, illegal, threatening, offensive, insulting and swearing, derogatory, defamatory, vulgar, pornographic, indecent, personality rights, damaging or similar nature in the nature of all kinds of financial content, legal, criminal and administrative responsibility for the content of the sender member / members are belong.
Related News