Markkanen and his 43 points catapult Finland, which will face Spain in the quarterfinals

The pivot was the best of the match and led his team in the victory (94-86) over Croatia. 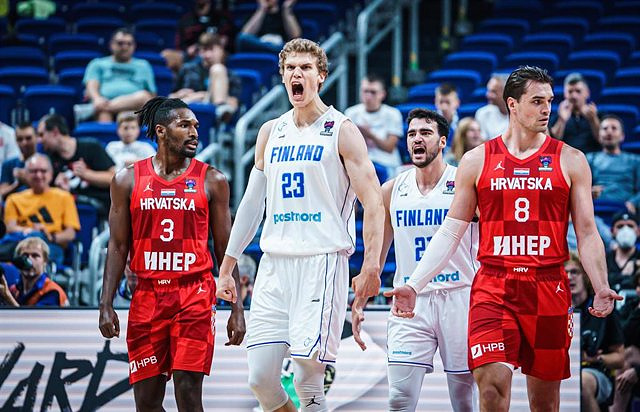 Poland, who got rid of Ukraine (86-94), meets Slovenia in the quarterfinals

The Finnish team beat Croatia (94-86) this Sunday in the round of 16 of the Eurobasket and will face Spain for a place in the semifinals, after the outstanding performance of center Lauri Markkanen, who finished the match with 43 points and a PIR of 47, while Poland continues in the tournament after getting rid of Ukraine (86-94), thanks to some good final minutes.

In the tournament with Luka Doncic, Nikola Jokic or Giannis Antetokounmpo as proper names, Lauri Markkanen wanted to join the party and was unstoppable against the Croatia of Bojan Bogdanovic and Mario Hezonja. His 43 points and nine rebounds were the main argument to confirm Finland's candidacy for the quarterfinals, with the Utah Jazz player as the most dangerous threat for Spain in the following tie this Tuesday at 5:15 p.m. in Berlin (Germany) .

Markkanen was the owner of the match from the beginning, supported by the triples (17) of his teammate Salin, very successful this Sunday. Croatia, who won the first quarter (20-21), could only keep up until the break, with more prominence from Saric (12 points) and Bogdanovic (23).

However, the order and consistency of Finland, without much experience in major tournaments -they have only played one World Cup and in a Eurobasket their best result is sixth place-, were enough to continue their dream, with their NBA 'stem' as hope.

For their part, Poland won a game that was very close until the last five minutes, when Ponitka (22 points) and Sokolowski (13 points) emerged as heroes of the Polish team against Ukraine. With a final score of 86-94, nationalized point guard A.J. Slaughter was key with 24 points and 5 rebounds.

Although the duel started evenly, Poland showed more accuracy in the first round, with a very successful Slaughter holding his team. However, Ukraine did not take their face from the game and always followed in the footsteps of their rival, taking the second quarter and reaching the break 45-42.

Same script after the restart, with Poland dominating and Ukraine entrusted to a seasoned Artem Pustovyi to reach the last and final quarter alive (67-69). With only one minute to play and 86-88 on the scoreboard, Poland decided in their favor from the free throw line, to place the final 86-94 and advance to the Eurobasket quarterfinals for the first time in the last 25 years. .

‹ ›
Keywords:
PoloniaCroaciaFinlandia
Your comment has been forwarded to the administrator for approval.×
Warning! Will constitute a criminal offense, illegal, threatening, offensive, insulting and swearing, derogatory, defamatory, vulgar, pornographic, indecent, personality rights, damaging or similar nature in the nature of all kinds of financial content, legal, criminal and administrative responsibility for the content of the sender member / members are belong.
Related News