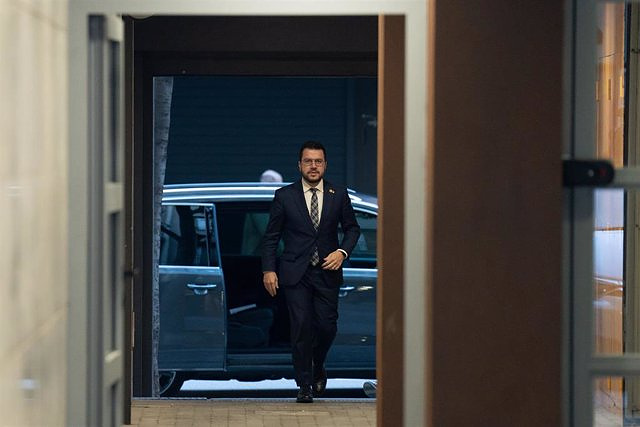 Clean Hands has presented this Thursday before the Supreme Court a complaint against the president of the Generalitat of Catalonia Pere Aragonès for an alleged crime of disobedience to judicial resolutions, in reference to the sentence of the Superior Court of Justice (TSJ) of Catalonia that urges to the educational centers of that autonomous community to comply with 25% of the classes in Spanish.

In the letter, to which Europa Press has had access, the union asks the Criminal Chamber to investigate Aragonès, considering that "there are rational indications" that the president of the Government has disobeyed the resolution of the Catalan court when approving the decree law "that establishes the non-application of the parameters number or percentages" of Castilian in educational centers.

Clean Hands has also highlighted as "signs" that the Generalitat "began to work on the new language policy law" and that the Ministry of Education ordered educational centers not to comply with the ruling of the TSJ of Catalonia.

"Within these tortuous and prevaricating paths, in order not to comply with the sentence of 25% of the Castilian, they have taken another step using the illegal Dialogue Table to fail to comply with the judicial decisions in the case at hand," he added.

The union has attached to the complaint some statements by Aragonès on TV3 and Catalunya Radio, "where he stated that the Government and the Generalitat" had agreed "to fail to comply with 25% of Spanish in Catalan schools."

For Manos Limpias, the actions of the Catalan president are an attempt by "indecent and illegal" paths to "neglect what the law --sentence-- obliges". For this reason, he has asked the Supreme Court to admit his complaint, to take a statement from Aragonès himself and to collect for himself the "minutes of the Dialogue Table."

The magistrates of the Criminal Chamber of the High Court must decide whether or not to accept the document presented by the union for processing.

‹ ›
Keywords:
Tribunal SupremoEducación
Your comment has been forwarded to the administrator for approval.×
Warning! Will constitute a criminal offense, illegal, threatening, offensive, insulting and swearing, derogatory, defamatory, vulgar, pornographic, indecent, personality rights, damaging or similar nature in the nature of all kinds of financial content, legal, criminal and administrative responsibility for the content of the sender member / members are belong.
Related News