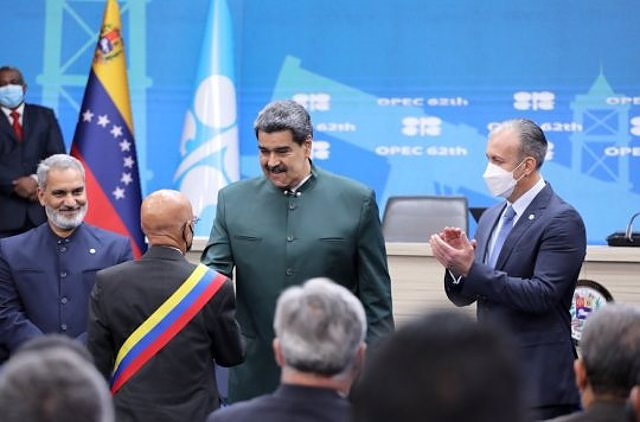 Venezuelan President Nicolás Maduro reiterated this Wednesday Venezuela's willingness to export oil and gas to the markets of Europe and the United States in order to contribute to global energy and economic stability.

"We have said it, we have ratified it to all diplomats: Venezuela is ready and prepared to fulfill its role to supply the oil and gas that the world economy needs, in a stable and safe way," Maduro assured during a meeting with Venezuela. the secretary general of the Organization of Petroleum Exporting Countries (OPEC), Haitham Al Ghais, has reported 'El Universal'.

The Venezuelan president has indicated that his government "has been substantially recovering" the oil industry, whose production fell to historic lows "after years of disinvestment and lack of maintenance."

"Today it is around 700,000 barrels per day," Maduro stressed, recalling that in 2002 the figure of 2.3 million barrels per day was reached, according to 'El Nacional'.

The president of Venezuela expressed last Friday his willingness to provide energy resources to Europe and the United States, alleging that a crisis in the supply of gas and oil during the winter could be "tragic."

"Now winter is coming in the north, there is a crisis in the supply of gas, oil, a crisis that could be tragic and I tell Europe and the president of the United States, Joe Biden, Venezuela is here," said the head of Venezuelan state during a visit to a petrochemical complex in the north of the country.

In this sense, Maduro stressed that Venezuela "will always be here at the order" of the country's oil and gas to "stabilize the world and to help whoever needs help."

‹ ›
Keywords:
VenezuelaEstados UnidosNicolás MaduroPetróleo
Your comment has been forwarded to the administrator for approval.×
Warning! Will constitute a criminal offense, illegal, threatening, offensive, insulting and swearing, derogatory, defamatory, vulgar, pornographic, indecent, personality rights, damaging or similar nature in the nature of all kinds of financial content, legal, criminal and administrative responsibility for the content of the sender member / members are belong.
Related News